In the spring of 1955, nuclear test explosions were conducted in a Nevada, Las Vegas desert. Much controversy surrounded these 14 atomic blasts but the United States Government assured the public that these tests were being conducted to protect the nation in the event of a nuclear attack.[i] The main purpose of these tests was to study the ability of various military equipment and structures under nuclear detonation.[ii] Atomic blasts under 50 kilotons would be conducted for national security purposes but radioactive exposure was still a huge concern of the public. Radioactive clouds and rain were reported in nearby cities after the nuclear testing had begun, but again the public was reassured by Atomic Energy Commission scientists working with Operation Teapot that there was no danger to health. Opposing scientists in Colorado reacted by stating that there were no “safe” levels of radioactive exposure and lung cancer, leukemia and birth defects could be side effects of these atomic tests.[iii]

The 13th nuclear test explosion took place on May 5th, 1955 and was named the “Apple 2.” An atomic bomb was dropped from a 500 foot tower to simulate the height of the Hiroshima and Nagasaki bombs. A mock town dubbed “survival town” was built to test the effects of the blast on 3 different houses built from brick, concrete, and wood. Each house was fully stocked with furniture, appliances, food and mannequins to record the aftermath of the nuclear explosion. After being cancelled various times on account of weather, Apple 2 was detonated and erupted with a yield of 40 kilotons, greater than that of the Hiroshima and Nagasaki bombs.[iv] Over 1800 troops observed and tested the effects of the bomb.[v] One of these observers was Lea Stewart who was born and raised in Sea View, Prince Edward Island. Stewart joined the Canadian Navy in 1944, at the age of 16. Unique to his navy training, Stewart was sent to a warfare school to train in atomic, bacteriological, chemical and damage control. He was then posted to Kingston, Ontario where he was joined up with 60 armed forces personnel to form the 1st Canadian Radiation Detection Unit. This troop was trained in atomic warfare and radiation detection using Geiger counters. Stewart also had training in radioactive decontamination of electronic equipment. Along with many other people who were in some way involved with Operation Teapot, Stewart was also worried about the effects of the bomb and what the aftermath might be. Face down in a trench with his hands crossed under his face, Stewart experienced the Apple 2 explosion. In the coming days as the radiation dispersed, Stewart, along with other troops examined the aftermath. The brick house was complete rubble, the walls of the concrete house were standing but everything else was a mess and the mannequins had also disappeared completely. A spruce board in which Stewart had written his name with a metal stencil had burned the impression into the wood after the blast. This was done to show the effects and what could happen to an individual if they were closer to the bomb.[vi] 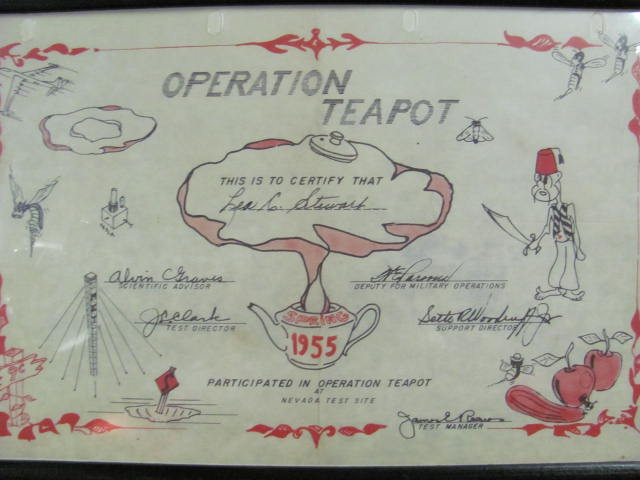 Fifty years later Lea Stewart recalled his time in the Nevada desert in an interview with The Guardian newspaper in Charlottetown, printed on March 26, 2005 as well as writing a personal account of his experiences. To see the cover of the newspaper article click here: Lea Stewart Newspaper Article. The article, along with a certificate and the spruce board with Stewart’s name burned into it are on display in the Veteran’s Memorial Military Museum in Kensington, Prince Edward Island. These artifacts will be on loan to the National War Museum in Ottawa, Ontario during the winter months since the Kensington museum will be closed. Lea Stewart passed away from lung cancer on August 18th, 2006 at the age of 78

A camera crew was at the Nevada site during the nuclear testing in 1955. Footage of Apple II can be viewed by clicking here: Apple II Video