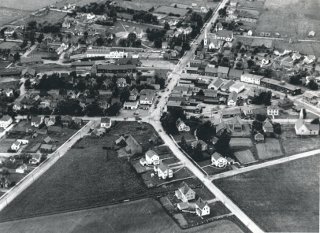 Geographically, the project encompassed all homes, fifty years or older, within Kensington’s town boundaries. Kensington is situated in the eastern end of Prince County, Lot 19, sixty kilometers south-east of the Island’s capital city, Charlottetown.[i] The Town has an approximate population of 1500 people, and is only two square kilometers in size. There are prominent hills in the north east, north, and south east perimeters of the town; however, the central area of the town is basically level where most development has occurred.[ii] It could be said that the project was amplified by the small boundaries of the town because it allowed in-depth research regarding all older homes.

[ii] Town of Kensington, Submission to the Commissioner on Land use and Local Government (Government of Prince Edward Island: [2009]), http://www.gov.pe.ca/photos/original/clg_kensing_09.pdf (accessed Sep 28, 2011).

The Kensington Town Crest consists of a red cross and sword from the arms of London, England. The name Kensington was adopted from the borough of Kensington, London, England. The center emblem represents the potato blossom and its significance to the local economy. The Canadian Civic Crown adorns the top of the crest, along with the lobster which celebrates the importance of another primary industry. Finally, the last element of significance would be the town’s colours of red and white.[i]

In the beginning, Kensington was merely a crossroads for the roads leading to Charlottetown, Summerside, Malpeque, Margate, and Irishtown; and why the area was given the name “Five Lanes End.” Among the first settlers were the Barrett’s who purchased land and set up an Inn and Tavern for travellers. The Barrett’s establishment prompted another name change, and the village was renamed “Barrett’s Cross” in 1824.[i] By 1862, the population had grown and another hotel owner, Thomas Simms, successfully proposed the name, Kensington. However, it wasn’t until the introduction of the railroad in 1875 that Kensington gained an economic advantage over neighbouring Margate, PE and began to prosper and grow to the thriving community we know today.[ii]

[i] Kensington Lions Club, A History of Kensington Prince Edward Island: Inclusive to 1973, 10.