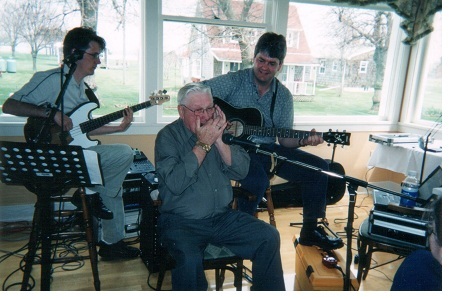 Elmer MacGillivary was born October 7, 1926 on the Seven Mile Road to Angus MacGillivray and Christina (Smith). His father was a carpenter and worked on building the Victory Chimes and his mother was the local midwife.

Elmer worked at Maclean’s Ready Mix for 36 years, but he is also known in the community for the work he has done organizing benefit concerts for over thirty years. If you needed a benefit concert organized, Elmer would be the one to call.  He would find entertainers, book the hall or school and often would act as Master of Ceremonies for the night.

Elmer’s daughter Dianne remembers that the Montague Lions Club always donated the building free of charge for benefit concerts. The club members were often good to help set up chairs and were always great to help out. Dot MacAulay was always good to show up and sing at a benefit; however Elmer didn’t have a driver’s license so Dot was always good to pick him up and they would drive together all over the Island. Most often Elmer’s family would even provide the meal for the musicians after the concert making sandwiches and cookies and such. Elmer started out working with the Montague Fiddle festival and was often a judge for the step dancing and other events. Elmer could play the harmonica and his son Bobby MacGillvary plays guitar and sometimes plays with the Garth Gillis Band. Garth Gillis gives Elmer a lot of credit for his work organizing benefits over the years, Garth has been playing the benefits Elmer organized for 30 years.

Elmer’s daughter Cathy Whitty helped him for the last fifteen years or so with benefits and is now organizing them on a smaller scale, her husband Frank plays at a lot of benefits as well.

Elmer and his family were such popular patrons at KFC on Friday nights that when hours were cut back from an 11 pm closing to nine pm, they kept Friday night to accommodate them. Over the years in Kings County and surrounding areas, Elmer and his family have organized thousands of benefits and raised tens of thousands of dollars for families in need.

Written by Betty-Anne Acorn from the memories of
Cathy and Frank Whitty,
Dianne Macleod, Garth Gillis and Mary Antsie