Education in the Kinkora Area 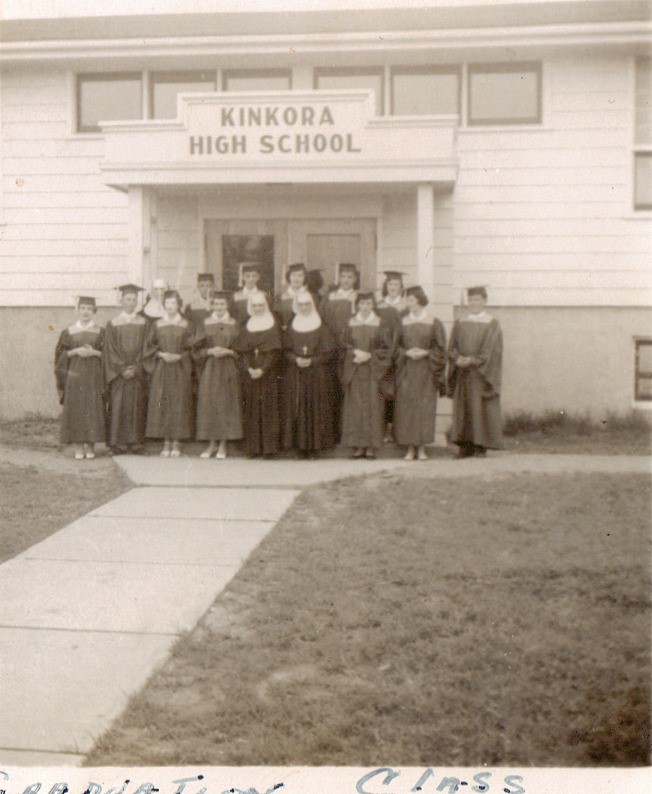 Below is a brief introduction to education in the Kinkora Area. For more information please visit Kinkora’s Community Collection at the library/CAP site in Kinkora. Enjoy a sample of the photographs, documents and oral history interviews on this subject in our Digital Collection.

The people of the Kinkora Area have long been known for their tenacity when it comes to fighting for the rights of education. From the earliest struggles to build a grammar school in 1869 to the present day fight to keep schools open due to enrolment numbers. Each generation has taken up the cause1 .

In the 19th century much of the fight for education was due to scarce resources. It was expensive for the early settlers to build schools, pay a teacher and provide learning materials. In a time when education was not considered by many to be a necessity; the struggling settlers of Kinkora built their first school building in 1848. By 1869, a grammar school was built followed by a two room school house in 1908 and a succession of newer buildings2.

The Sisters of Saint Martha opened a convent in Kinkora in 1921 and dramatically changed the course of education for the Kinkora Area. The sisters took over much of the teaching duties in Kinkora. In 1935 the sisters moved into the former McIver home and the previous convent was turned into a Junior High School. After a fight in 1941 by the local school trustees and Father M.J. Smith, Kinkora became the first rural school district to have grade eleven.

In 1953 the Province made grade twelve mandatory and the need for a high school building was made clear. A new elementary school was also built that year where the Business Centre is currently located. The Minister of Education said no to grade twelve in Kinkora because the cost of a new high school was too great. Once again the community banded together and raised the funds to build a two room high school which opened in 1955. The first grade twelve class graduated in 1956.  After being awarded the right to open as a Regional High School and uniting with Miscouche in 1962, Kinkora built a new nine room high school3.

The consolidation of smaller schools from surrounding areas meant that many of them were closing. By the late 1960’s and 1970’s Kinkora became the center of education to the surrounding communities. Children were no longer boarding at the convent to go to school, but were bussed in.  Consolidation has been an ever present obstacle in the fight to keep Kinkora Regional High School open due to its small size.

In the 1980’s the fight became opening a larger elementary school in Kinkora. After much effort, Somerset Elementary was built in 1984. In 2000’s the struggle turned back to the high school and a need for renovations. After much negotiation with the government and a last minute battle to acquire a new gymnasium, ground was broken in 2002 and renovations completed in 2003.

The Kinkora area is fiercely proud of its long standing tradition of quality education. The passion to keep schools in Kinkora has also been passed down through the generations and will continue on. If you would like to learn more about education in Kinkora and see a sample of the Community Collection please go to the Digital Collections page.