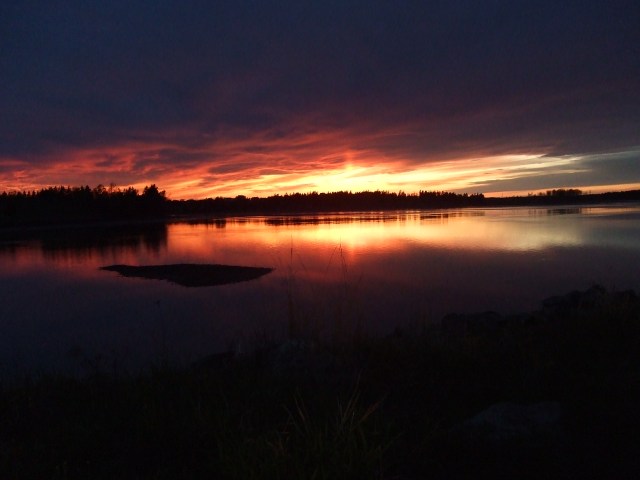 Cornwall is surrounded by the North River to the east and the West River to the south.  The North River and the West River are two of three rivers that flow into the Charlottetown Harbour.  Samuel Holland named these two rivers during his Island-wide survey in 1764-65.  The North River was originally named the York(e) River and the West River was originally named the Eliot River.  These two rivers played an important role in many different ways throughout the years of early settlement.  Before the time of roads, the rivers and waterways were used as the main mode of transportation.  As a result settlers first established themselves close to the shoreline for easier access to the water.  Ships frequently traveled along the rivers of the Charlottetown Harbour, carrying passengers and supplies.  The rivers also influenced economic growth.  For example, the shipbuilding industry was extremely popular and beneficial to the early settlers throughout most of the nineteenth century.  As Cornwall continued to develop as a farming community, the farmers began to use mussel mud as fertilizer for their crops,1 a resource that is almost no longer used at all on Prince Edward Island.  Even in later years, residents of the area enjoyed the river for leisure activities such as swimming and boating.   Perhaps most importantly, from the time the first settlers arrived until present day, local fishermen have been reaping the benefits of the many different types of fish and shellfish that can be found in the Rivers.  The North River is still a popular spot for fishing quahogs, however in earlier years oysters were more commonly fished.  For many years Hyde Creek was known as the best fishing spot in Cornwall, full of trout and smelts.

As the population of the Island increased and as Charlottetown grew into a commercialized city, it became more important for the settlers in the surrounding areas to travel into Charlottetown, especially on market days.  Before the North River Bridge was built and the ferry service began, settlers traveled to Charlottetown via Milton.  There was a bridge called Moor’s Bridge which was located north of Cornwall.  The river had become small enough that it was easier to erect a small bridge there and travelers west of Charlottetown would have taken this route to town.  During the winter time it was common for people as far as Crapaud and Borden-Carleton to travel east and cross the frozen North River from the Dockendorff property at York Point onto Brighton Road in Charlottetown.  The road that led to the Dockendorff property was used for more than a century, basically from the arrival of the Dockendorffs in the late 1700’s up until the 1950’s.  This road became known as the Ferry Road.

A Report on Estuarine Resource Inventory Survey of North (Yorke) River, P.E.I. written by K.M. Campbell, W.I. Judson and K.C. MacWilliams was published in 1972 and provided a complete report about the North River.  It stated that the North River is “fairly deep,” and is a “well defined channel for approximately 2 2/3 miles up from the boy to approximately 2/3 of a mile below the TransCanada Highway Causeway.”2  The channel north of the causeway becomes very shallow and is actually known as Graham Rogers Lake.3  There comes a point where the salt water meets the fresh water from the Lake.

The North River has been under scrutiny for several decades as a result of the negative effects the causeway has had on the environment surrounding the river.  In short, the causeway has inhibited the necessary water exchange between the southern and northern portion of the river which has caused several environmental problems.  There are several issues in need of re-evaluation and attention concerning the river, environment and wildlife.  The river has become polluted with pesticides, fertilizer and manure runoff from soil erosion over the years.4  This pollution has had a significant effect on the amount of fish and shellfish that are available in the river.  In more recent years, there have been many advisories and warnings for fisherman to avoid fishing at certain times because of the contaminants.

Wildlife in the areas surrounding the river has also been greatly affected.  As Professor Palermo points out in his book, North River, Prince Edward Island, “North River’s coastal environment also exhibits a diversity of wetland areas.  These wetlands are constantly threatened by increasing pressures of development.  They are important as a breeding ground for wildlife habitat and function as natural filtration systems for groundwater and water born pollutants.  It is essential to prevent infilling of these natural resource areas to maintain the balance of this ecosystem.”5

In a report written by Stanley E. Vass in 1980 he observes that the more beneficial option for the river would have been too build both portions of a causeway and a bridge to allow for sufficient water exchange.  Unfortunately, it is too late.  The causeway is here to stay and has seen many renovations over the years.  At the time of its construction it was seen as an ideal solution as the cost of bridges were much higher and other priorities like paving the roads took precedence.6  With new scientific advances, much more is known about the environmental condition of the river, and efforts have been made to improve the conditions.  Every effort must be made to correct the issues by working around the current causeway.

‹ Sources up The North River Bridge ›