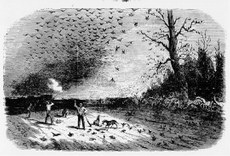 To understand what the Murray Harbour area was like in pre-historic times, it’s helpful to know a bit about the history of the region and the island. It’s believed that people first arrived in the Maritimes about 10,600 years ago. At that time, the Maritime provinces were very different; until about 5000 years ago, the sea level was much lower, and what is now the bottom of the Northumberland Strait was exposed land that joined PEI to New Brunswick and Nova Scotia. The coastline was further out as well, on land long since covered over or washed away. There's evidence that people were in the Basin Head and Tryon areas when the Maritimes were first settled1., and we know that around 800 or 1000 AD, the people of PEI ate seal, walrus, black bear, woodland caribou, beaver, otter, fox and shellfish.2. There were no skunks or raccoons3., and coyotes hadn’t yet crossed the ice, but there were martin, lynx4., hares,7. and great flocks of passenger pigeons.5. There may, at some point, have been wolves6. and moose4., and in 1876, one 80 year old Murray Harbour man reported on a government survey that he’d found moose antlers several times.7. 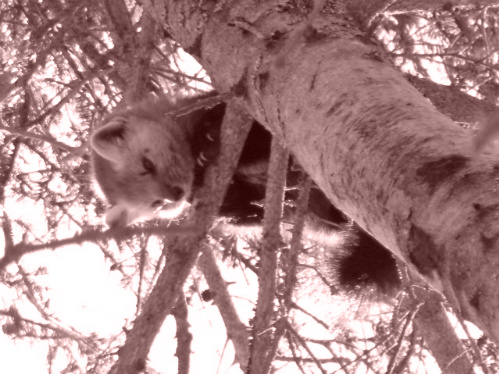 Now back to the Murray Harbour area.... While we don't know very much about how the Mi'kmaq used this area, there is evidence that they occupied Murray Harbour at some point prior to the areas recorded history (so before 250 years ago). The Mi'kmaq used different camps throughout the year,8. moving between inland hunting camps where they were sheltered by the forest in the winter and coastal camps with abundant shellfish and marine resources in the summer.9. It’s likely that the area was used seasonally, as a summer camp, and there is some evidence that could support that; a prehistoric shell midden was discovered on Reynolds Island, one of the five Islands in Murray Harbour.10. Shell middens are basically piles of shells people have discarded, and have been found all over the world; it’s kind of like someone in the future finding your compost pile! Stone celts, which are tools used in the same way an axe would be used, were found near the shell midden along with some lithic debitage, or waste flakes from making the stone tools. This site has never been dated, so we really have no idea how long ago this area was inhabited by the Mi'kmaq, but it’s important to note that people had occupied the area long before the 1700’s; It’s also worth noting that the Mi'kmaq people continued to inhabit the area during the summer until well into the 20th century.

Although the Portuguese had sent people to PEI on many fishing expeditions,11.  the French were the first European group to record their explorations around PEI. In 1534, Jacques Cartier described PEI as “the fairest land that may possibly be seen”12., but there would be no French settlement attempts for almost 200 years. The French didn’t settle in the Murray Harbour area, but they knew of it, and called it Havre a l’ours, or Bear Harbour (these same French surveyors also named Cape Bear; it’s not clear how the bears in lot 64 made such an impression!). It was named in 1728 when a French Officer named Jacques de Pensens was sent to survey the forests of Isle St. Jean in search of good mast trees for the French Navy. He reported that Havre a l’ours had fine mast trees, second only to what would become Savage Harbour.13. The trees they were looking for are the red and white pine trees that are supported by this area’s sandy soils,14. and although these trees are much less common today, Murray River still retains an old growth grove of pines by McLures Dam.

In 1765, Samuel Holland surveyed PEI for the British crown, dubbing Havre a l’ours ‘Murray Harbour’ after Governor James Murray of Quebec,15. and carving the area into lot number 64. The crown granted lot 64 to two men; Colonel Maitland and Richard Wright Esq. Very little activity* would be recorded in the area until 20 years later, when a man named John Cambridge purchased the property.

* One quite significant thing was recorded in this time period: in 1786, Joseph Snake was born near Murray Harbour; he would be appointed Head Chief of the PEI Mi’kmaq in 1859. Joseph Snake died in 1880.16.