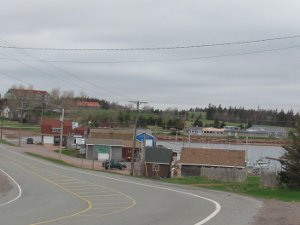 Stanley Bridge was originally called Fyfe's Ferry after one of the first settlers, William Fyfe who ran the ferry service before there was a bridge. The name Stanley Bridge came about in 1865 at the suggestion of a prominent local merchant, E.L. Lydiard. Stanley River was named by Captain Samuel Holland in his original survey of Prince Edward Island, after Sir Hans Stanley who was the Lord of the Admiralty at that time. Stanley Bridge was a booming community in the 1800s with five shipyards employing many locals. Its nice harbour area and wharf made exporting and importing goods an important role in the local economy.

‹ Speech for the 25th anniversary of the St. Augustine's Credit Union written by Theophilus Blanchard up Interview with Tommy Gallant ›