Richard Knox was born on December 28th, 1927 to the parents of William and Ann Knox in Heatherdale. William and Ann arrived on PEI in 1927 on the ship Metagama from Ireland. They resided in Heatherdale for eleven years before moving to Valleyfield. William and Ann had six children: Isabella, Thompson, Lily, Richard, Robert and James. Isabella was born in Ireland in 1919 and was the only one in her family who wasn't born on the Island.

Richard attended the Valleyfield school and later Victoria Cross school which were both one room schools. For transportation to school he would walk daily and in the winter months take a horse and sleigh. Richard attended Montague Regional High school before taking one year at Prince of Wales College.

Richard met Janet Smith from Charlottetown and married her on March 19th, 1941. They had four children together: Steven, Cheryl, Darlene and Caroline.

Richard has been involved in many organizations such as the Garden of Gulf Museum, International Gideon’s, Junior Board of Trade, Wyseman Club, Elder at St. Andrews, Retired Postal Employee Association and is currently active in many others. He feels that it is important to be involved in community affairs and enjoys meeting the public.

Richard worked as a postal employee and for four years as a Postmaster. He founded the Montague Food Bank in 1988 and ran it for twenty years.

Richard and his wife Janet now currently run a beautiful B&B at Knox’s Dam as his retirement project. The B&B is located on the property that Richard’s father purchased on December 15th, 1956. The property used to belong to the hydroelectric power plant which supplied the Town of Montague with electricity called Montague Electric. Knox’s dam is well known for its cherished beauty, recreation and for drawing the attention of visitors and locals. The B&B contains beautiful character, history and charm that can be seen at www.peihistoricplaces.ca .

Pictures in and around Knox's Dam can be seen below: 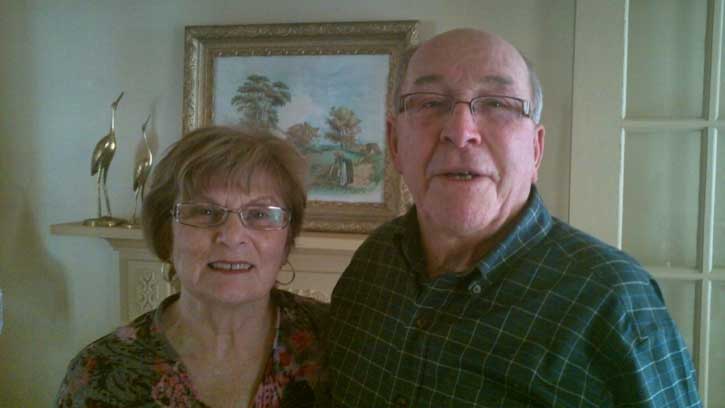 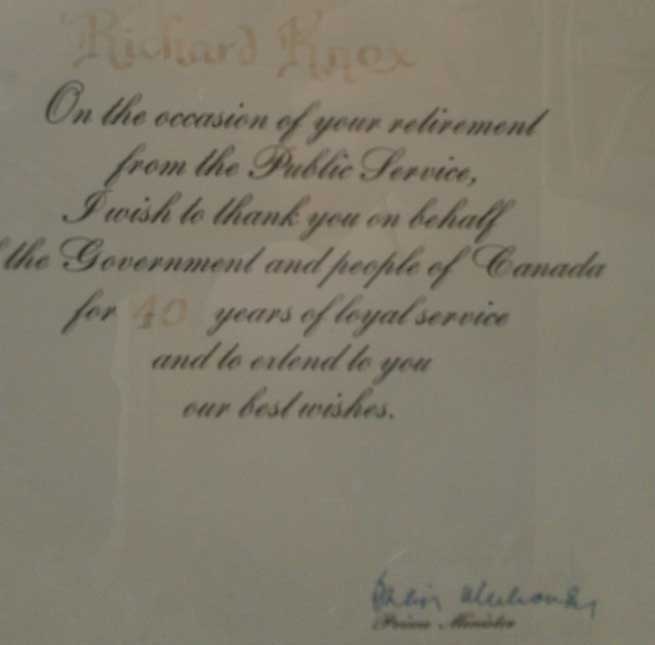 above: This is Richard's 40 year plaque that he received from the Public Service. It reads:

Richard Knox
On the occasion of your retirement
from the Public Service,
I wish to thank you on behalf
of the Government and people of Canada
for 40 years of loyal service
and to extend to you
our best wishes. 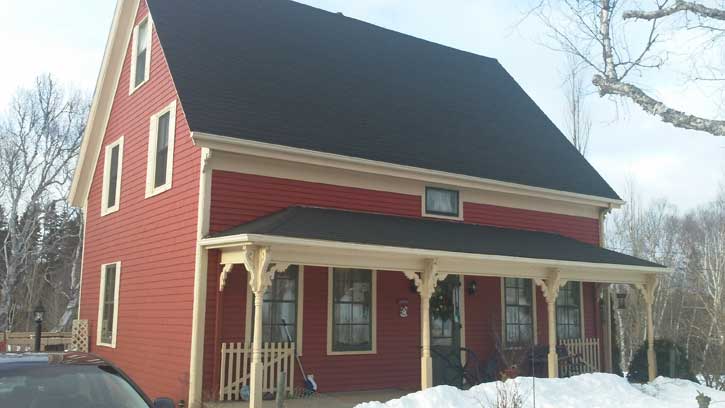 above: Front of Knox's Dam Bed & Breakfast
Run By: Richard and Janet Knox 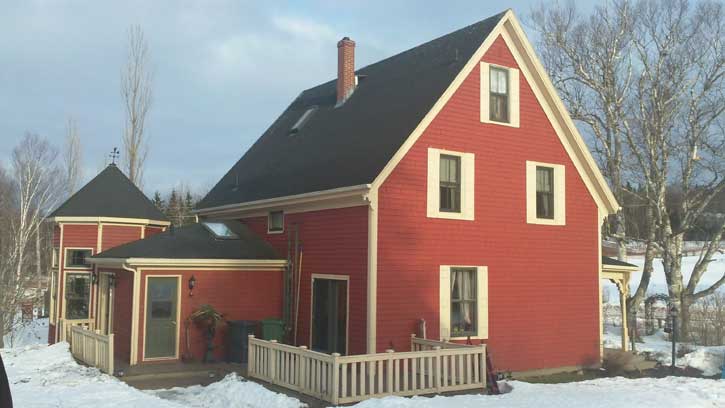 above: This is the back of Richard and Janet Knox's Bed and Breakfast 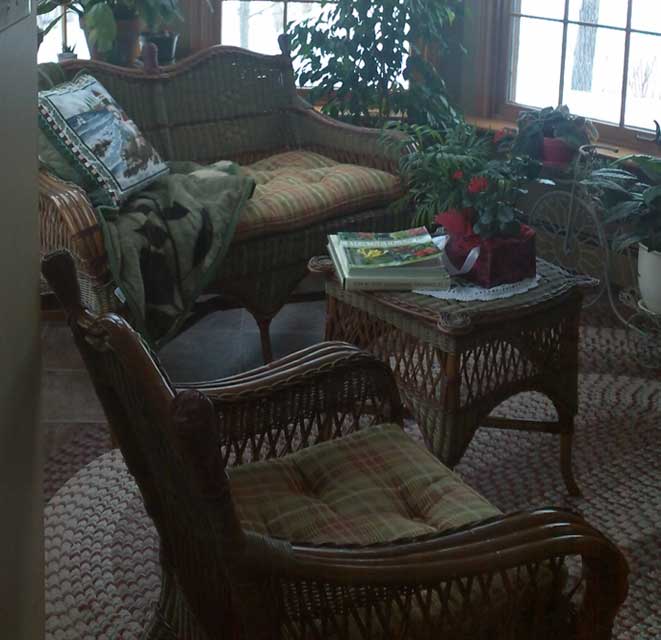 above: This is the Sitting Area that is inside Knox's B & B. From the outside of the building this area looks like a little Gazebo. This part of the house is nicely made. 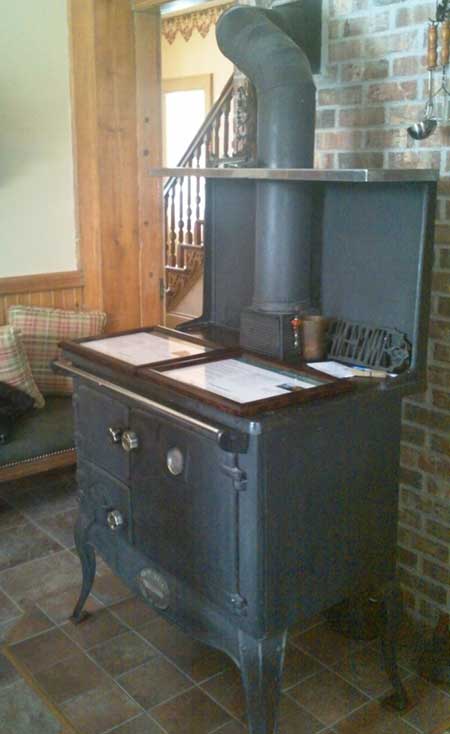 above: The woodstove inside of Knox's Dam B & B 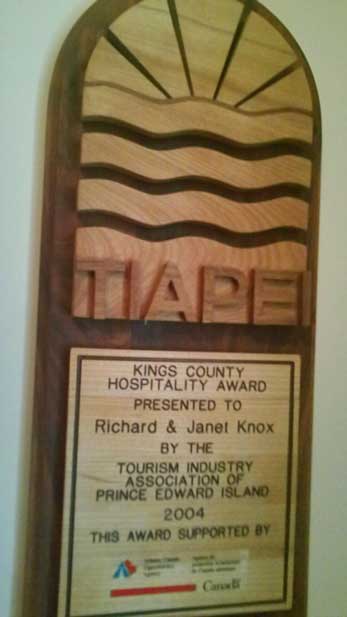 above: This Plaque is from TIAPEI and it reads:
Kings County
Hospitality Award
Presented to
Richard & Janet Knox
By The
Tourism Industry
Association of
Prince Edward Island
2004 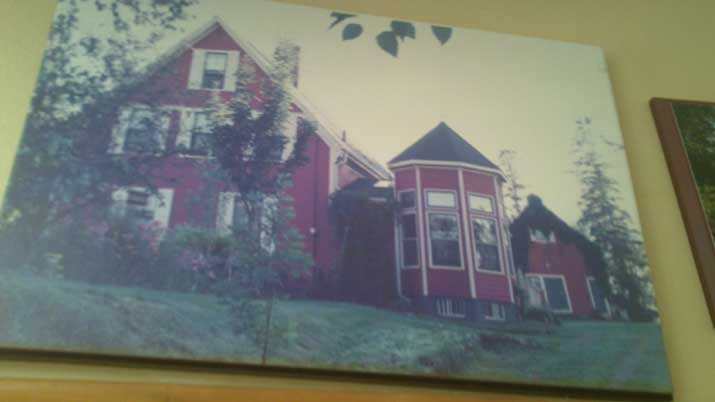 above:This is an older picture of the back of Knox's Dam Bed & Breakfast
(photographer: unknown)

Richard recalls a story that was told to him by his sister Isabella. It takes place in the 1930’s, a time when the Great Depression was evolving and people in some areas felt its effects. Here is Isabella’s story as told by Richard:

My sister Isabella always wanted a watch. One day our father sent Isabella and Tommy to get groceries in town. When they bought the groceries there was left over change from their purchase that was to be taken back to their father. Their father felt that purchasing unnecessary items like a watch was not wise and money should go towards food and clothing. The old saying “Food on the table and clothes on our back” is what comes to Richard's mind when telling the story. Their father always made sure to pay everything in cash so there would be no bills owing. So on that day with the change that was left over Isabella bought a dollar pocket watch that she wanted. On the way home she hid it in a bean pot that her mother wanted her to buy at the store. When she came home she took it out of the bean pot when she had the chance. From that day on she was afraid that her father would find out that she bought this watch without him knowing. Her brother Thomas would get mad at Isabella and comment saying “tick tock tick tock “to which their father would not know what they were speaking of but the two youngsters did. Isabella was so worried over her father being cross that she would even dream at night; yelling out that she put the watch in the bean pot!

Richard has the bean pot this present day and recalls the story when glancing at the bean pot placed on the shelf in the kitchen for viewing for the story to be shared.

Below: The Bean pot that held the watch on the way home 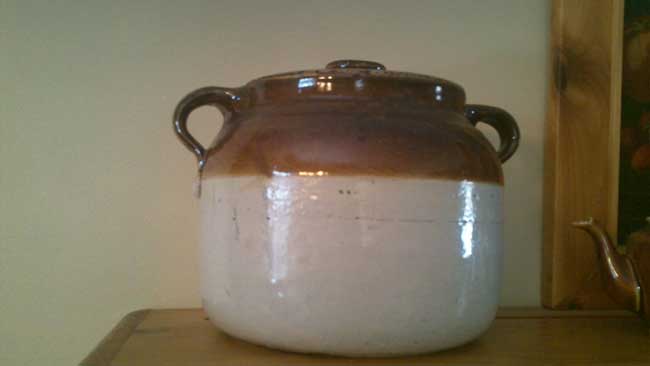 Written By: Crystal Callaghan from the memories of Richard Knox

‹ Businesses Outside the Cardigan Area up Entertainers ›