As surprising as it may be, the industry of shipbuilding was no stranger to the Cornwall area during the 19th century.  Records indicate that the majority of the shipbuilding activity in this area and most of the Island for that matter took place during the first half of the 1800’s.  The commencement of the shipbuilding industry on Prince Edward Island can be attributed to the outbreak of the Napoleonic Wars.  In Britain, there arose a fear over the security of timber supplies and British shipyards had converted to manufacturing warships.  The British government therefore encouraged its colonies to develop their timber resources, which resulted in the maritime colonies using timber to meet that demand.1  That demand only increased and came strongly from the United Kingdom and to a lesser extent, Newfoundland.2  Shipbuilding quickly became a major industry on Prince Edward Island and a great source of wealth for many Islanders.

Prince Edward Island proved to be an ideal place for wooden shipbuilding with its abundance of timber including birch, beech, pine, spruce, maple and juniper.3  The Island’s many bays, inlets, and sheltered rivers also provided excellent areas in which vessels could be launched.4  Shipyards began popping up all over the Island, and the areas along the North and West Rivers were no exception.  Shipbuilding became established in the North and West River areas around 1820.5  There were several shipbuilders around the vicinity of Cornwall, the more well-known builders included William White, Simon Dodd and brothers Napoleon and Frederick LePage.  Although the exact locations of these shipyards proved almost impossible to find, there is a certain amount of information that can be extracted from various resources.  For instance, it was very common for ship launches to be announced in the local newspapers.  In fact during the 1820’s, Prince Edward Island newspapers are littered with them.  Some of these launches can be found in the following pages.

William White was born in East Looe, Cornwall, England in 1790 and died at York Point on February 23, 1858.  He lived on the Island for 42 years, and was “…highly respected as a man of integrity and uprightness.”6  The location of his shipyard(s) is somewhat of a mystery.  However, in their book, Shipbuilding on Prince Edward Island; enterprise in a Maritime Setting 1787-1920 de Jong and More indicated that by 1849 William White had moved his shipbuilding enterprise from the North/West/Dog River area to Charlottetown.7  William had moved his shipbuilding business to the city during the winter of 1848-49.8  William’s sons, William Jr. and Clement also became prominent builders in Charlottetown.

Newspaper announcements and ship registers have all listed the location of Simon Dodd’s ship launches at either York or Elliot River.  It is possible that he may have had more than one shipyard, but that cannot be confirmed.  It is known from several government records that Mr. Dodd resided in Charlottetown.  He also owned an inn called Ship-Inn.  Simon Dodd died in Charlottetown on January 14, 1857.9

*** A map of the southern section of the Cornwall area along the West and North River can be found at the Public Archives and Records Office of Prince Edward Island.  This map has the names of a few early settlers as well as place names, roads, mills and shipyards.  According to this map, there was a shipyard located in Primrose.  A portion of the map can be found below. 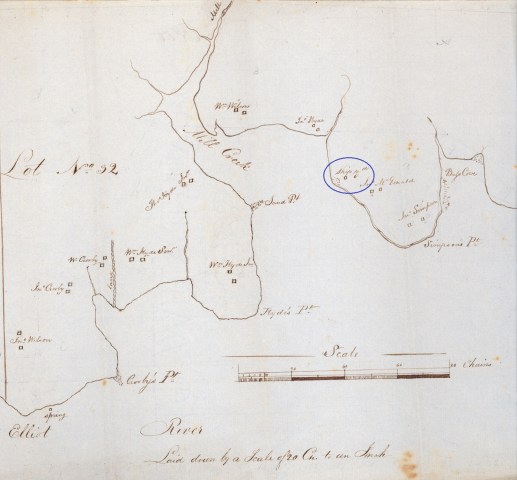 This shipyard was located in the area which is now Primrose Point.  This map is dated 1825.  (Source: Public Archives and Records Office of Prince Edward Island, Map# 0,677 - altered)

According to The Prince Edward Island Register in 1825, “On Saturday The Jane, a barque of 300 Tons, built for Messrs. Dodd & Peake, was launched at Mill Creek on the Elliot River.”10  When comparing this information with the map, one can guess that perhaps Simon Dodd’s shipyard is the same one that is indicated on the map.***

The LePage brothers, Frederick and Napoleon built ships along the York River11, but resided in Charlottetown.  Not much else is known about the LePage family or their shipbuilding enterprise.

Various records indicate that there was a wharf in York Point.  Most older residents will tell you that there was a ferry that used to run between the end of the Ferry road and end of Brighton Road in Charlottetown.  Just south of the Ferry Road is another road called Wharf road which local fisherman still use.  Could it be possible that this area was also a shipbuilding site?

Most of the ships built around the West and North Rivers were schooners.  There were also a few brigs, barques, and sloops, built as well.  It is interesting to note that just over ¾ of the ships built in the West & North River area were transferred, which can be seen on the Ship Register table.  Also, 1/3 of schooners built across the Island were built by their owners.12  Ironically, Cornwall area’s close proximity to Charlottetown was a help to the industry in the early years, but was also a main contributing factor to its downfall in later years. In the beginning, merchant were making contracts with local residents, and shipbuilding in Charlottetown was not as prominent because the industry was thriving along the Hillsborough, West and North Rivers.  A decline began in the area in the late 1840’s.  Timber stocks were depleting, and the land that became cleared was being used for agriculture.  The area also seemed to lose its non-resident investors while Charlottetown was quickly becoming the commercial centre for the industry.  After the mid 1800’s shipbuilding had increased substantially in Charlottetown while the industry had declined almost to the point of non-existence along the North and West Rivers.13