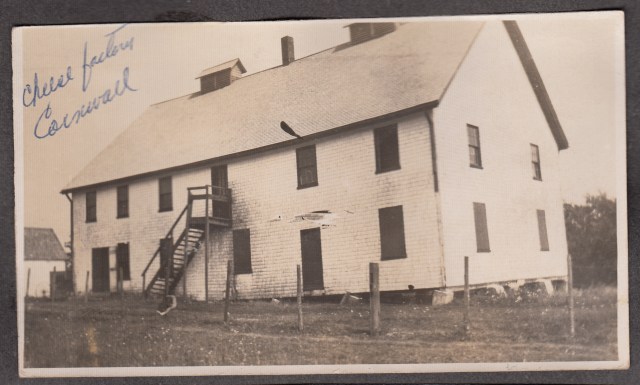 A very interesting fact about Cornwall is that it was, for a short time, home to a cheese factory.  It opened in 1882 and closed in 1917.1  The Riverside Cheese Factory Company was organized by President John Ings, Esq and business agent and manager F.T. Newberry Eq.2  He leased 3 acres of land from Zechariah Mayhew3 which places the cheese factory on the Ferry Road on the same side as the old Cornwall school just before creek.  The building was a large two storey building 70 feet long and 30 feet wide with 18 foot posts.  It also housed an 8 horse power engine which cost $3000 to $4000.4

The first cheese-maker and superintendent was Mr. Muir from Ingersoll, Ontario who stayed for several years and lived with his wife in the house above the Cheese factory.  His assistant was a man named Mr. Joy of Charlottetown.5  Other cheese-makers who worked at the factory included C.J. Brown who also lived above the factory with his wife;6 Wesley H. Hood7; Wesley Heseltine of Ontario8 whose wife was Fern McCoubry of New Glascow; they also lived in the house above the factory.9  Finally, the last cheese-maker was the infamous John or ‘Jack’ Ellsworth.10  (Much more about Jack Ellsworth in another section)

The factory ran as a co-operative.  The company received 2 ½ cents for manufacturing for each pound of cheese and the balance went to the farmers.  A milk run took place each Monday morning in which milk was collected from farmers in the surrounding area.  The farmers had the milk cans ready with fitted covers that could be raised or lowered according to the quality of milk.  The covers also ensured that the milk would not spill and splash on the bumpy ride back to the factory.  Once the cans arrived at the factory they were weighed and the farmer received a credit for the amount of milk he supplied.11

Shortly after the establishment of the company, Newberry ran into some financial difficulties and had no choice but to sell.  The farmers in the area did not want to see that happen and pulled together to purchase shares.  They managed to save the company and continued to operate the company as a co-operative.  The share-holders now called the company The Cornwall Creamery Company.  The factory officially closed in 1917.12

The Cornwall Creamery Co. not only made cheese, but butter as well. Apparently the wives of Cornwall were known for their great cheese and butter.  They were hesitant at first to give milk to the company, until they found that they could make some good money from it.13  According to Frank McArthur, patrons from as far as North Wiltshire and Bonshaw provided milk to the factory. It came to be a prosperous business, even exporting some products to England.  There was also a piggery operated by the factory which ran on the by-products of the milk.14  Because there were left-overs of eggs and butter-milk they would be given to the pigs, nothing was wasted.  It was said that Jack Ellsworth the cheese-maker had the fattest hogs in town.15  Jack also lived on the Ferry Road, conveniently close to the factory.  Cheese was only made in the summertime while the cows were still being milked.

After the factory closed, it sat vacant for a few years until it was torn down and the lumber used to make an indoor rink on the same site.16 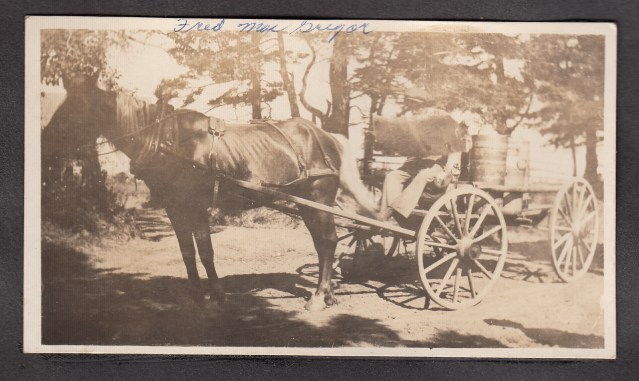 ‹ Sources up The Cheese Making Process ›