You could literally sit down for days on end and create a list of names.  There have been so many people in the community of O'Leary that have had a huge impact on hockey.  Joanne Wallace, Warren Ellis, Dr. Dewar, James Smallman, Richard Livingston, Allan Shaw, Orville Willis, Dewy Cooke, Pat O'Brien, Stuart Gilcash, Dean Getson, Thelma Sweet, Barry Cooke, Eric Philips, Howards Cove Seafood, Alton Ellis, one could go on and on.

It is impossible to sit here and mention everybody, so if you feel we have left somebody out, it was not intentional.  This is simply a list that people sat down and constructed off the top of their heads.  Feel free to contact us and we can edit the list.  But we assure you, we are aware that this list is by no means complete.

It is only fair though to create a bit of a back story about some of the people above.

Dr. George Dewar came to O'leary in 1947.  He was as huge helping had for the youth of the community.  Dr. Dewar was a philanthropist that sought no credit for his helping hands.  If there was a child that was unfortunately unable to play hockey due to financial reasons, Dr. Dewar saw that he played.  He would purchase skates, pay for fees, whatever he could do to help out the community.  The man was a saint.  He had a helping hand in the arena too, making the comment that it should be turning much more than a .75 cent profit one year.  After a board meeting, Dr. Dewar was nominated to chair the rink organization.  Alton Rayner had the canteen up and running.  The following year the rink saw a $1000 profit from the canteen alone.  Additionally, the rink itself turned a $1000 profit.  The man had the golden touch.  When the rink collapsed in 1956, Dr. Dewar spearheaded the fundraising operations to have it rebuilt.   Dewar was a huge figure in the community, and cannot go unrecognized.   He famously laced up his skates in 1996 at 80 years of age to be the celebrity skater at the O'Leary Community Sports Centre Inc.’s Skate-a-thon.  It goes without saying that Dr. Dewar loved O'Leary and had a heart of gold. 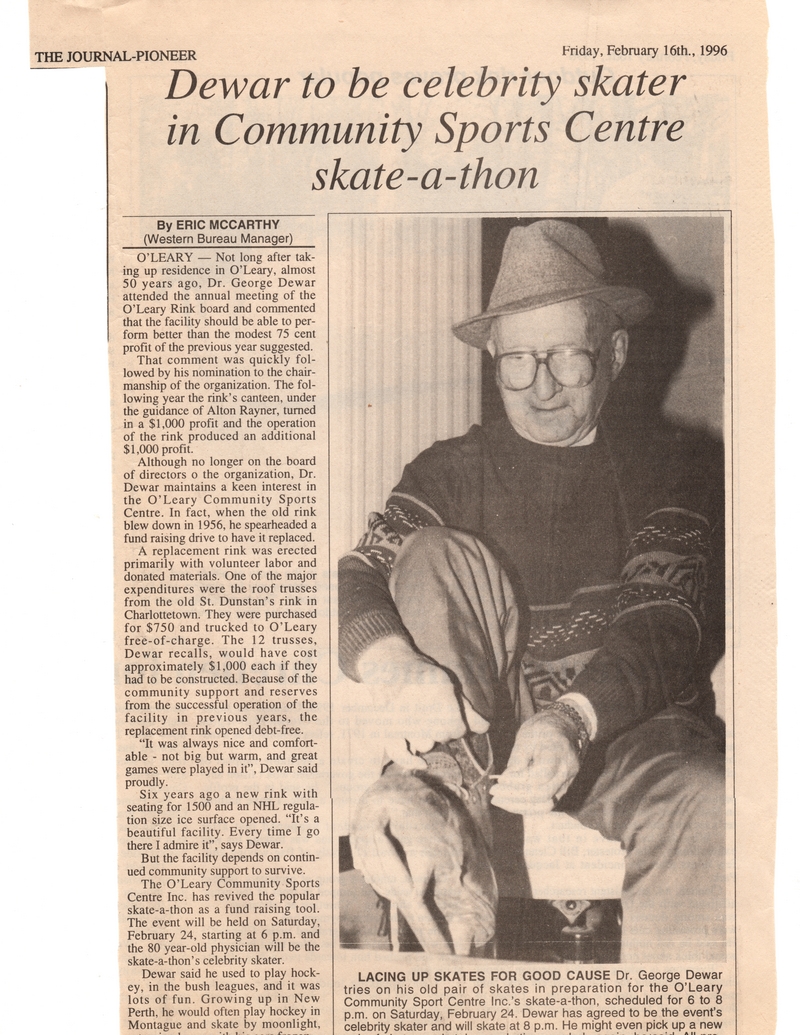 James Smallman was probably the most influential figure in O'Leary Hockey.  He was involved in hockey for years.  He coached countless teams, and helped out more kids than anyone can imagine.  Most people will recall the trips to the games.   James would pile as many kids as he could fit into his big old car and drive them to their games.  Most people will laugh and tell you about getting changed in the back seat with eight other kids, pulling on their gear and hitting each other in the faces by accident.  But one thing that was really cool?  He would stop off at ponds after the games and let the kids skate to their hearts content.  Just relax and unwind.  James is widely regarded in O'Leary as the father of minor hockey.  He made so many things possible, and was a presence in community hockey for many years.  Nobody could say a bad thing about James, and for that, nobody would try to.  He was recognized with many awards in the community.  Dean Getson another figure on the coaching side of Hockey has brought James coaching style into his own, something the community loves and respects.  James was somebody everybody loved, and all remember. 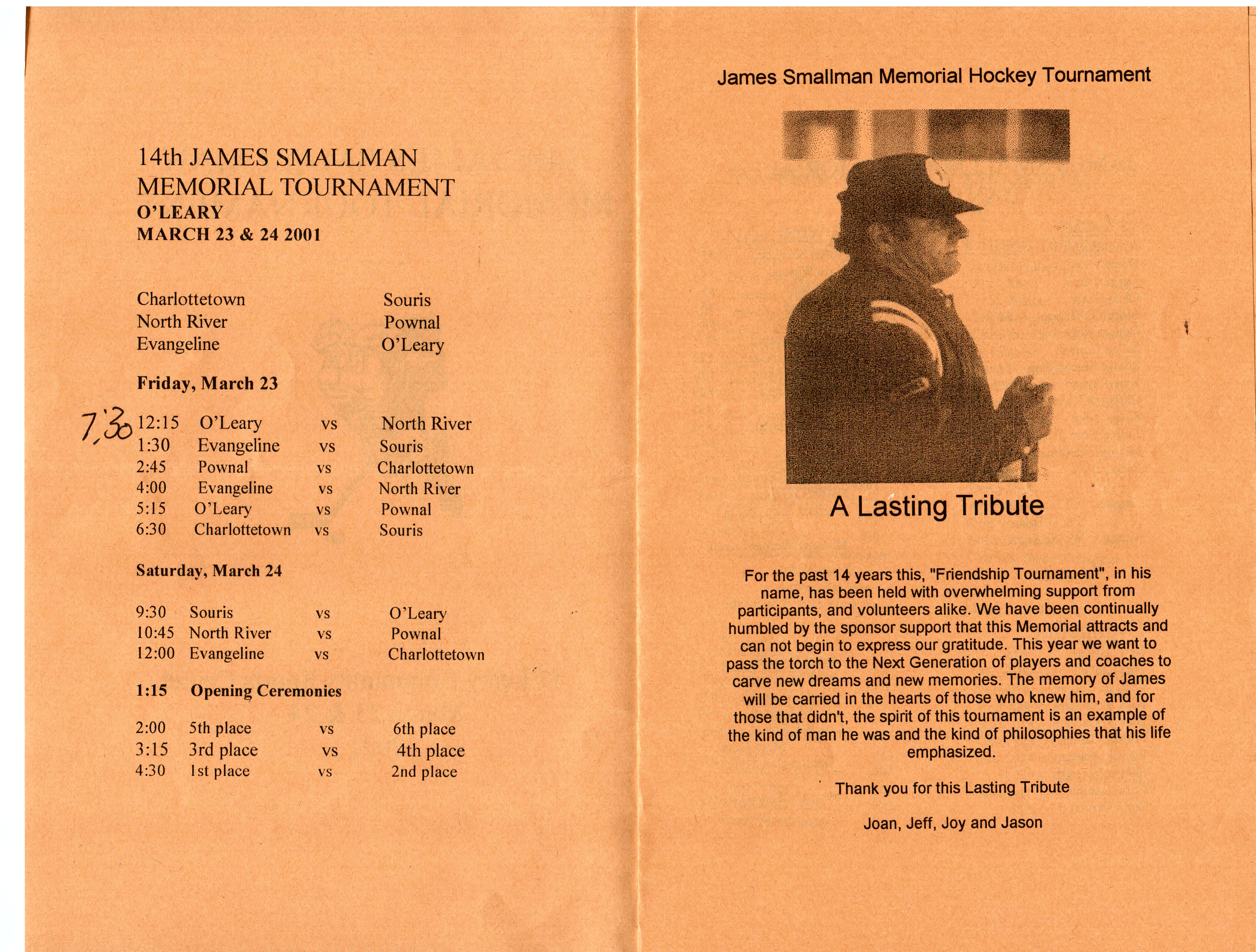 Howards Cove Seafood made it possible for the Senior Maroons to play hockey in the 80’s and 90’s. The company sponsored the team for quite some time.

Thelma Sweet who will deny to this day any involvement with helping the community in regards to hockey.   However, she was the woman behind the door of the community office.  Thelma did all of the books at the rink for years, and helped out with the fundraising committee.  She also had a hand in the resurrection of the arena, after it went bankrupt.

Joanne Wallace for her managing of the arena, and her involvement in Hockeyville.

Warren Ellis was a huge figure in the new arena during construction. This fellow was named O’Leary Citizen of the Year! Warren was a player sponsor, team sponsor and donated continuously to the rink.  He deserves much credit for his involvement in O’Leary community hockey.

Eric Philips for his involvement in coordinating Jr B hockey, and he also was president of minor hockey in the 1980’s.

Stuart Gilcash deserves a thank you for making old timer and bantam AAA possible in the community.

Alton Rayner.  This man ran the canteen at the arena for years.  He made many things possible, as the canteen has been a money maker for the arena since it opened.

Richard Livingstone must be recognized for donating his time as the hockey announcer since the 1980’s.

This list could go on and on.  The point needs to be made though, that hockey would not be possible in O’Leary were it not for the people of the community.  So many people have stepped up and helped.  So many have chipped in to help those who love hockey and want to participate in the sport. From the arena to the skates on the players feet.  No one person deserves all the credit.  It has been the community that make hockey such a part of O’Leary.  It always will be.  Thank you to everyone who has been involved, who have made it possible!