The NHL All Star and the Bozo

The NHL All Star and the Bozo

The Philadelphia Flyers are a professional hockey team.  They came to the National Hockey League in 1967, and were the first non-original six team to win the Stanley Cup.  They did so in 1974, and again in 1975.  They have not won this trophy since, although they have come close to winning the Stanley Cup again in recent years. This year, they are holding the second best all time point’s average at .578 only trailing the Montreal Canadians at .590.

The Flyers or, as they are also commonly known as; The Broad Street Bullies have always been a team that flourishes on a reputation of being some of the roughest players in the league.  They are the team one of the NHL’s all-time greats, Eric Lindros has played on.  Lindros played for the Flyers from 1992 – 2000.   He holds an all-time point’s record for the Flyers, even though he had a short-lived career that was ended due to too many concussions and other injuries.

Lindros was said to be the “next great one” when he was being scouted and recruited to play the game at a professional level.   Born in 1973 in London Ontario, he played in the OHL for the Oshawa Generals, leading them to Memorial Cup Gold in 1990. He was named the most outstanding player in the league and also named the top player of the year in the CHL.   This led to Lindros being selected 1st overall in the NHL Entry Draft by the Quebec Nordiques.  However, he refused to play for them.  He was traded to the Flyers in June of 1992 in a lucrative deal which included other stars such as Peter Forsberg.  This is where PEI’s involvement kicks off.  In 1992 the Philadelphia Flyers chose little old O’Leary PEI to house them for their hockey camp.  The locals were ecstatic.  Phone calls were made, plans were arranged.  The team would stay at the Rodd Mill River Resort; local notable hockey figures were enlisted to help with coaching and employed during the stay as team assistants.  Robbie Henderson for example was one of the “Glorified Stick Boys,” as he put it in his interview.  He was a stick boy, which was great to him, as it gave him a chance to interact with the team.

Henderson had an opportunity to interact with Lindros during a prep session for a team scrimmage.  He was told to get him a new stick. Robbie could not find one on his bench at all.    Lindros told him to go look around for it, and to tell security the sticks were missing.  Lindros started to give him a hard time, and as Robbie puts it, “He became grim with worry”.   Lo and behold, later on, one of Robbie’s counterparts in crime Billy MacKendrick would discover he had two extra sticks. The search was off!  Lindros was furious.  And soon, as Robbie puts it, “the excitement around Lindros quickly wore off.  People began to realize he was not just an “average guy” but in fact, “a crappy person with little respect for those around him”.  But Robbie admits he was amazed at how complex it was to run a camp such as this.  The logistics involved.  He also recalls that during a practice a player lost a contact lens, so the two trainers were on their hands and knees on the ice, trying to find this contact… while the entire crowd watched.  All for one player.  Also, another interesting anecdote about Billy MacKendricks interaction with Eric Lindros: Billy, Robbie Henderson and Alan Hardy were all assistant trainers during the Flyers stay.  Not only did Lindros accuse Robbie of stealing his stick, he called certain people names!

It went down in the Civic Centre in Charlottetown.   Billy, Robby and Alan were all carrying glasses of water into the team’s dressing room in a sold out arena.  The dressing rooms were too small to warrant plumbing at the time, so water had to be manually carried to the players.  But after Billy was done carrying 15-20 glasses of water, he said goodbye.  Lindros chose to part with “Yeah, see ya later Bozo” in a hushed tone.   Billy chose to say nothing at the time and simply walked out.  After unloading gear back in O’Leary after the game at 2am Billy did however share the interaction with Greg McKie who had asked how their experience was.  He jokingly replied “Great, except Lindros called me a Bozo!”

McKie must have thought it rude enough to have a discussion with the Flyers head coach Bill Dineen about the incident.  Mr. Dineen must have proceeded to bawl Eric Lindros out; as at the next practice, during an intermission in the dressing room, Lindros sat Billy down and chewed him out for “ratting on him”.  Further proof of his charming personality.

All of this, however, is not any reference to how people behave or characterize themselves currently.  This was just a funny story of how a professional hockey player called a local of O’Leary a bozo.  Which one must recognize, is not something you hear or read about often.

Lindros would go on to become recognized as one of the all-time great players to grace the NHL calibre of play.  He became an NHL All Star and won numerous trophies including the NHL All Rookie Team in 1993, only a year after his time spent in O’Leary.  He would also win the Hart Memorial Trophy in 1995, which is awarded to the player judged most valuable to his team in the NHL, and the Lester B Pearson trophy in 1995 as well for being the NHL’s most outstanding player.

And that is the tale of the Star and the Bozo. 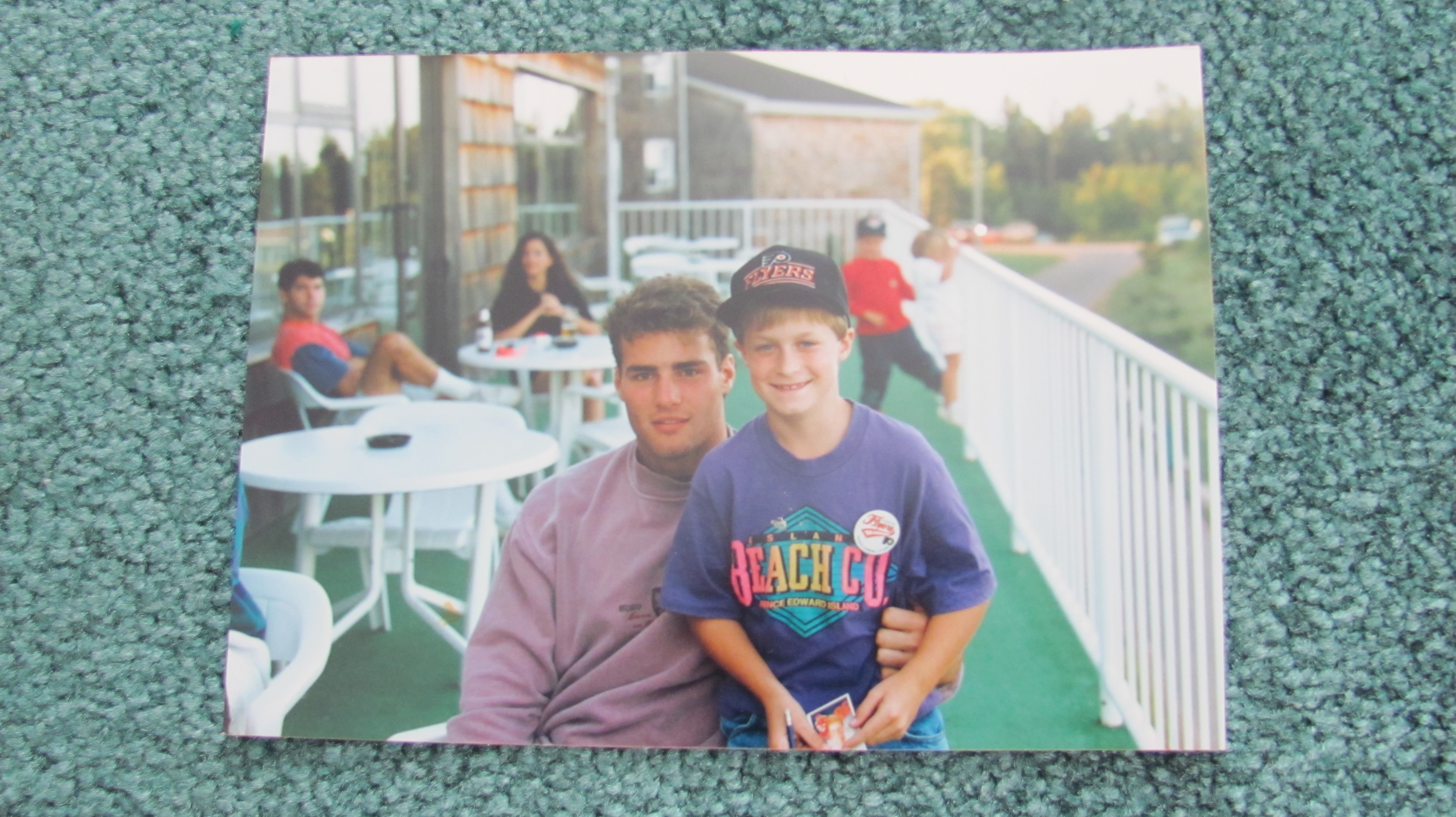 A shot of Eric Lindros in 1992, his debut year with the NHL's Philadelphia Flyers at the Rodd Mill River Resort with a local boy only identified as Kyle.

‹ The Maroons up Hockeyville P.E.I. ›