The Maroons is the most popular name one will hear or read about when it comes to Hockey in O’Leary.  The name covers most spectrums of Hockey, from Junior to Senior, most age groups, mens and womens Hockey.  They just can't seem to stray from the name around here.  What's with the name anyway? You never see it in modern professional sports...  If one dissects the word, does it not mean to get stranded somewhere?  Not unlike Robinson Crusoe, marooned on his island for years.  Heck, it even brings back memories of Bugs Bunny, referring to the likes of Elmer Fud, or Yosemite Sam as "What a Maroon!"   Hopefully when you really look at it, they likely were referring to the color of their jerseys.  The answer though, is simple. It is a tribute to another hockey team that started around the same time as the O’Leary Maroons.

Back in the early 1920's; Montreal Quebec had another team, other than the venerable Habs.  Their own Montreal Canadiens werent the only boys in town in the NHL.  They also had another team, The Montreal Maroons.  The Maroons were no strangers to the Stanley Cup either.  Claiming the coveted chalice twice in their brief tenure in the NHL.   They officially entered the league in 1924, and folding after the depression in 1938.

This is definitely where O’Leary got the name.

The Maroons name has been emblazoned in many forms in O’Leary.  They have been a Junior A team, a Junior B team, Bantam AAA, there have been Senior Maroons, Maroon Sisters, JR Maroons and more.  One thing is assured though, when you go to watch a hockey game in the community you can check out the Maroons in a few venues, Minor hockey, and the more elite Senior Maroons, a game that is guaranteed to be filled with excitement.

When one decides to play hockey in O’Leary, one strives for greatness.  It goes without saying that everybody wants to one day play in the NHL.  We all have dreams of grandeur whenever we set a goal.  In O’Leary, its either the NHL or the Senior Maroons.  And when you attend a Senior Maroons game at their home ice, the O’Leary Arena, you can see why.

The Senior Maroons have been graced by many a great player.  They have an extensive roster of high calibre players.  They have seen the likes of players that have been recruited by the NHL.  Darcy Harris was drafted by the Montreal Canadiens in 1998.  He stopped playing at that level in 2001, and graced the Maroons as recently as 2011.

The Maroons have also had record setting players, Barry Cooke who still manages the Maroons to this day, scored an amazing 11 goals in one game for the team in the early 1990’s.  That in itself is an accomplishment not many players of any calibre can share.

The team has had stories of success, and stories of defeat, not unlike any other team.  One thing about the Maroons though, is that they always step up to the plate.  If it’s the Jr Maroons, the Maroon Sisters, or the Senior Maroons.  Something comes with putting on that jersey.  The sense of pride is hard to miss.  One can easily see by watching the Maroons hit the ice, why every hockey player from O’Leary dreams of one day making it onto the O’Leary Maroons. 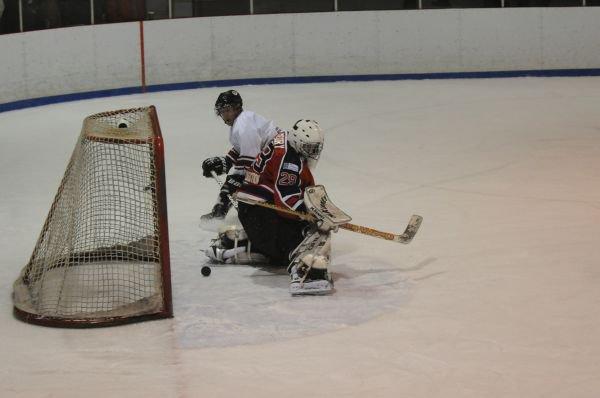 An O'Leary player watches as the puck trickles between the legs of the opposing goalie in 2010. 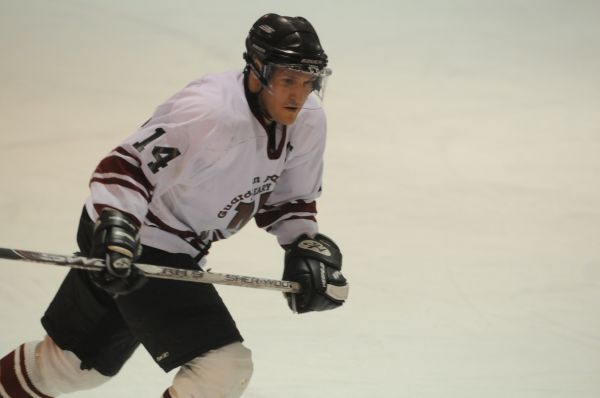 Darcy Harris suited up as an O'leary Maroon.  Harris, who was recruited by the Montreal Canadiens in the NHL, played for the team until 2011.

‹ Notable Hockey Players up The NHL All Star and the Bozo ›