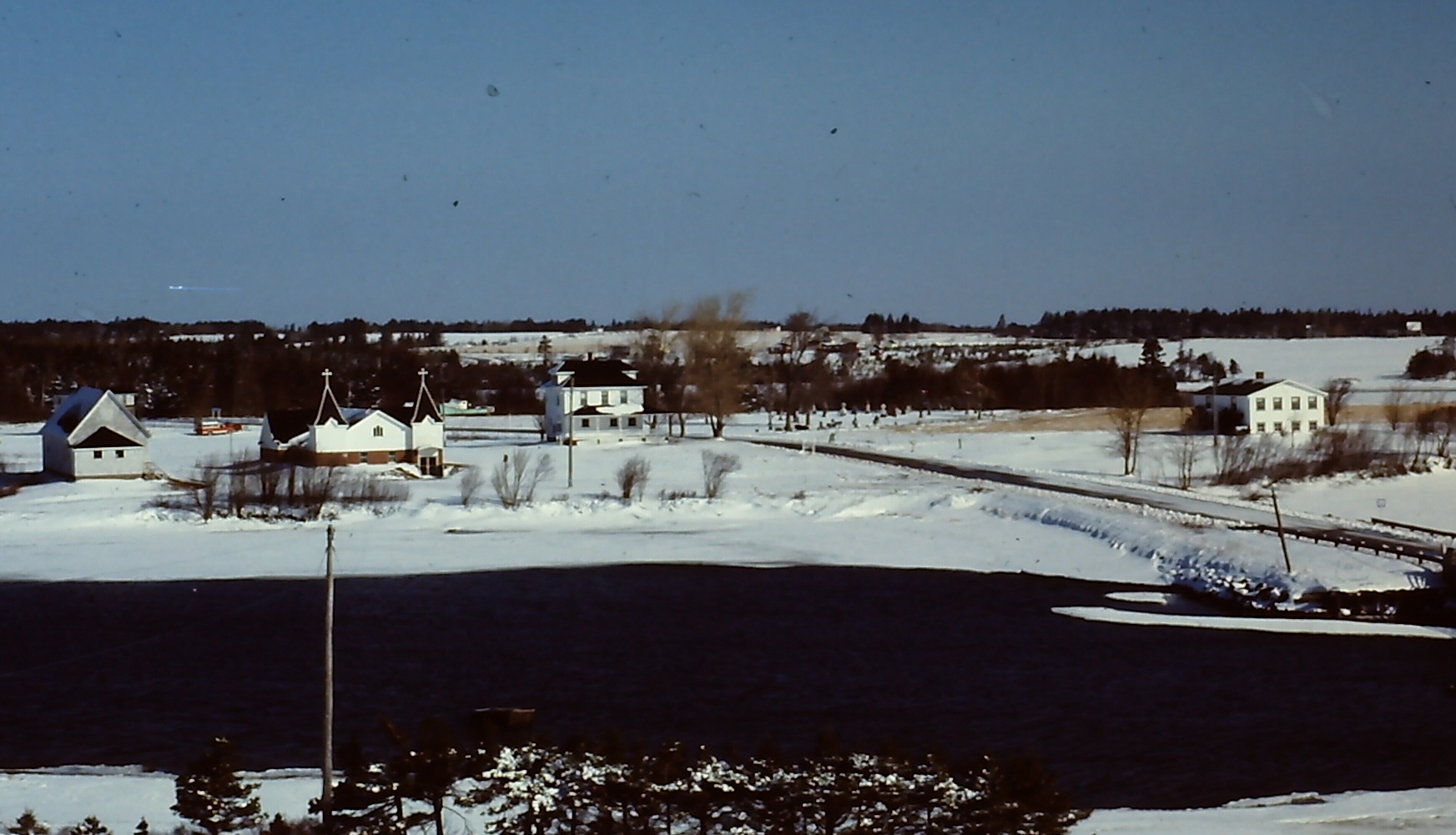 The Regina House is located in Corran Ban, across from the current Church and on the bay side of the cemetery.  In 1954, two sisters became teachers at Grand Tracadie School.  In the beginning the sisters drove from Mount St. Mary's to Grand Tracadie daily, however winter weather made the travel very difficult and they decided to move into a small rented house on a nearby lot.  It was the homestead of Ronald James MacDonald they lived in and ironically enough it was situated almost where the convent stands today.  This house was extremely cold and lacked any modern conveniences.  The sisters had to put up plastic over many areas to help “winterize” the home, and some electrical outlets were installed which enabled the sisters to use lamps, hot plates and radio.  For the next two winters after this cold first year, the sisters lived in the Parish House where Father Hood gave them room.[1]

The sisters lived in Ronald James MacDonald's home, and the parish house during the winters, until 1956 which is when a large new convent was built.  The convent had space for five small rooms, used for bedrooms or workrooms, a living room, a kitchen, a bathroom, a music room and a dining room.  The convent also had a laundry room, a furnace room, a storage room and a spare room which made it a major upgrade compared to their previous living arrangements.  The spare room, which was located on the lower level of this split level home, was used as a classroom for two years when the students of Pleasant Grove joined Grand Tracadie School in 1960.  The extra students over crowded the school in Grand Tracadie which resulted in a new three room school being built.  Once the new school opened the spare room in the convent was no longer used as a classroom and the nuns turned the spare room into a Chapel in 1961.  The first mass was offered in this Chapel on April 26, 1963 and the serving Priest was Father Parnell Wood.  The Nuns who stayed in Grand Tracadie taught not only at Grand Tracadie School but they also taught at Covehead when permitted, and Millcove School aswell.

In 1984, a big “first” for the Sisters at Grand Tracadie was when Sister Rose Setter was named administrator of St. Michael's Parish because she was the first Sister ever to hold that position within the Church.  Her duties included all of the affairs of the parish except the Sacramental Ministry which was cared for by a priest from the former St. Dunstan's University.[2]   To this day the Regina House is still used by the sisters serving in Grand Tracadie.

Assumption Convent was located in Tracadie Cross and was a mission for education.  In 1942, Reverend Kenneth MacPherson, the pastor at St. Bonaventure's Parish sent out an invitation to the sisters to come teach at the Glenaladale school.  The Sisters of St. Martha decided to send two sisters to teach for one year with potential of teaching longer, as long as there were proper living arrangements.  The sisters then moved into a vacant house, not far from the school, known as the Kings homestead on August 17, 1942.  The sisters had a trying first year in Tracadie Cross because of the living arrangements.  The home lacked running water, electricity, heating and plumbing.  They used lamps for light and used water from the neighbors to survive.

After the first year was over, the Sisters of St. Martha were reluctant to withdraw the sisters even though wartime restrictions prevented the possibility of building a convent.  The sisters obviously needed new living arrangements and so two rooms of the Parish House were set aside for the sisters to live in.  The rooms were divided by cotton “partitions” and created a kitchen, bathroom, two bedrooms and a music/living room.  It was here the sisters lived for seven years.

The sisters taught at Glenaladale which held grades 1-7.  The upstairs in the credit union hall was used for grades 8-10.  The pioneer teachers, who lived at the Kings homestead through the winter, were Sister Margarita (Agnes Kelly) and Sister John of the Cross (Jeanette MacDonald) and, Sr. Camelita Soloman from 1942-1943.  Other nearby school districts soon joined Glenaladale school, and an additional classroom was needed, so they built a second room onto the school in 1946.

Eight years after the sisters arrived in Tracadie Cross to teach a convent was built and completed in August, 1950.  They named it Assumption Convent in honor of Mary in the mystery of her Assumption (which had just been declared a dogma of the Catholic Faith).  Reverend K.C. MacPherson celebrated mass and blessed the convent on August 30, 1950.  In 1951, the convent was blessed by Bishop James Boyle.  The student population continued to rise at Glenaladale, and some girls came to board at the new convent.  By 1952 there were three classrooms, one of them located on the second floor of the convent for Grades 9 and 10.

A major contribution made to Tracadie's school by the sisters was the music Sister Carmelita provided.  Sister Carmelita provided piano lessons on Saturday's and after school.  She and Sister Margeret Devereaux also put in many hours to help train the students for Christmas concerts.  In 1960 Sister M. Winnifred McIver became a part time music teacher at the school and her music program put Tracadie on the musical map of P.E.I.  Another major contribution made by the Sisters to the community of Tracadie was when they opened a kindergarten class in Scotchfort in the fall of 1970.  These classes were directed by Sister Rita Walker and assisted by Miss Georgina Knockwood.  The sisters also made arrangements to go to Scotchfort in the evenings to help the kids with homework.

Yet another major contribution the Sisters helped with was keeping Tracadie Cross Consolidated school open.  In 1972 there was a proposed closure for the school in Tracadie Cross, but it was Sister Laura McCabe who led the opposition and won, as a result Tracadie remained open.  The many contributions of the Sisters of St Martha have been greatly appreciated by the community of Tracadie Cross and St. Bonaventure's Parish. So on August 2, 1992, a celebration in honor of the fiftieth anniversary of the Sisters arrival in Tracadie was held and sponsored by the Parish Council and Catholic Women's League.  There was a mass, dinner, open house and tributes to honor the Sisters.[2]

The convent was closed in 2009, and now operates as a youth group home.

Be sure to check out our digital collection which includes more photos and audio from the sisters themselves.