Over the years Cornwall has been home to many capable blacksmiths.   The earliest record of a blacksmith in Cornwall dates back to 1864.  Hutchinson’s Prince Edward Island Directory lists Francis McNaughton and Thomas Welsh as blacksmiths in West River.  Although their addresses are listed as ‘West River,’ they are found under the Cornwall, Lot 32 listing.1  Cornwall was at times also referred to as the West River settlement.  The 1863 Lake Map also proves that Francis McNaughton ran a blacksmith shop in Cornwall as you can see below (although his name is spelled differently, names were often spelled out phonetically, so it is not uncommon to see many different name spellings for the same person).   His shop was located on the ‘Back Road’ or Cornwall road very near where it meets the ‘Tryon Road’ (later the TransCanada Highway).  Although Thomas Welsh cannot be seen on this particular section, his name appears just to the west (or in other words to the left) of Jno Hyde on the larger section of the map. 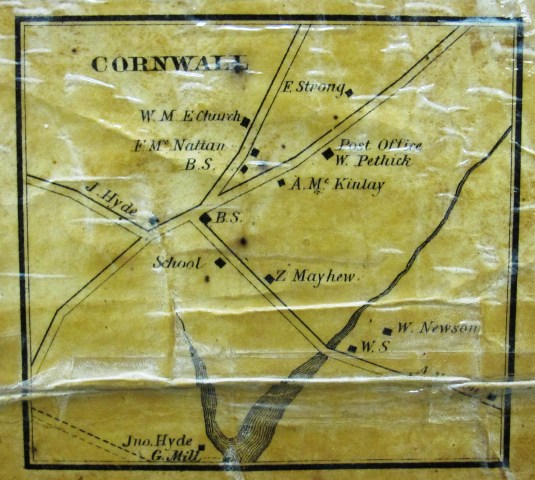 Lovell’s Prince Edward Island Directory - 1871 lists the same two blacksmiths for Cornwall, McNaughton and Welsh.  It also lists George Warren as a blacksmith under the North River, Warren Grove Mills area.  The 1881 census lists the names of ten blacksmiths in Lot 32, only three of which can be confirmed as actual residents of Cornwall. The three Cornwall residents were Samuel Frizzell, David Welsh and Michael Welsh; the latter two being sons of Thomas Welsh.  Samuel Frizzle is mentioned again in the 1891 census.  David Walsh, Joseph Warren and Frederick Warren were also listed as blacksmiths and were confirmed residents of Cornwall.  As for the final census in 1901, Walter Frizzell and Joseph Warren were listed as blacksmiths.  A man named John Henderson was also listed as a blacksmith, but the location of his whereabouts cannot be confirmed.

When speaking with the senior residents of Cornwall the names of three men were constantly mentioned; Robert Frizzell, Golding Smith and Roy Bruce.  They were spaced out almost evenly across what is now the town of Cornwall.  When travelling from west to east Robert Frizzell came first, his shop was close to the Clyde River boundary.  Golding Smith was next, whose shop was located in the centre of the Village across the road from the store.  Last was Roy Bruce who actually lived in former community of North River, which is now Cornwall.