Below: Margaret Quinn doing what she loves "Quilting" at the Cardigan Firehall. 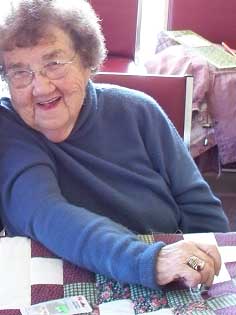 Margaret “ Babs” was born on May 18th, 1924 in Buckinghamshire, England to the parents Harry and Dorothy Burton. Margaret then moved to Heva England, Southern England to a household of Henry the 8th. Harry (her father) worked as a chauffeur to a Mr. Lassalle, first cousin to the Princess at the time. Margaret can remember living in a beautiful massive house that had ninety windows and sixty- six doors. Mr. Lassalle would sleep with a loaded revolver under his pillow as the house contained many valuables.

Margaret attended school in Heva where she would walk a mile and half every day. She left school at the age of fourteen due to war. Margaret got a job with a confectionery company and tobacco shop in EdenBridge for three years. She was then offered a job across the street at a shoe Shoppe that she accepted. Margaret worked there for three and half years and travelled by bicycle before switching to a train due to bombs form war. She comments that the bombs would chase the train. After Margaret left the shoe Shoppe that she worked in, she moved back to where her father worked as the owner had sold it and it was taken over by War Time Nursery. The war time nursery was for children that had to be evacuated out of England due to the war. Her parents would be both working. The mothers worked in factory making ammunition and the father gone to war. This was a safe shelter for children in the country away from the bombings in the city. There were twenty nine children that lived in this house that Margaret would help attend and cook for in the last year she was there.

Margaret has many memories of the war including remembering one day in the garden looking up in the sky and noticing something going in and out of the clouds with a red tail. She never seen anything like it before and thought she “seen the devil”. She went to other coworker’s and explained that she saw the devil. It was known to the people as a “Doodle Bomb” which was a pilotless plane bomb that was from France. The bomb would fly as long as it had fuel and would then crash when it ran out of gas whenever it landed. She can remember one of the war time nurseries that was located ten miles away from where she was located being hit with one of these doodle bombs. There were twenty-one children and nine nurses killed that day that were all buried in one grave.

On the property where the war time nursery was located there were Italian and German prisoners that would cut wood and do other odd jobs. There was also in the area four hundred anti-air craft guns that would await incoming planes. Margaret can remember not being able to sleep upstairs but under the stairways and another three months on the kitchen floor due to the shaman metal coming through the roof. The fighters would bring enemy planes in from the coast and the ant-air craft guns would fire at them hoping they would crash into the barrage balloons. The barrage balloons were huge balloons full of gas that would explode when hit. This was one of the defense mechanisms used before the enemies would reach London.

One night in London which was located 29 miles away from the war time nursery there was an explosion of oil tanks. The explosion lit up the sky allowing Margaret the ability to read in her living room a newspaper. There was a rush within London of people trying to reach underground air raid shelters. There were hundred and seventy-one people rushing all at one time. A lady was carrying an infant and the blanket was dragging on the ground so she tripped causing all the people to trip and to pile on her and amongst each other. Around a hundred people suffocated to death.

Margaret also remembers the train station in Victoria which operated in total blackness. There was no light of any description allowed incase bombers would see it in the sky. The train had curtains to black out the light from the train. Margaret lived close to a street where a convoy of soldiers would drop in for a flask of water or tea. The trucks that they driven would be in blackness and there was a reflector on the trucks to tell them apart.

Margaret met her husband to be, at an EdenBridge dance in January 1943 by the name of John Quinn. He was a military officer in the army and was at that present time on leave from an injury. They were married on November 3rd, 1945 at the parochial house with Father McPoland. Margaret then came to Canada at the age of twenty one in 1946 and has resided ever since on PEI. They moved into the homestead where it is still currently occupied by her son Jimmy Quinn for many years before building their own house in 1975 that she still lives in.

Margaret has been very dedicated and included in the community ever since moving to the Island. She tells us many organizations that she was involved in, but mentions “she doesn’t want to feel as though she is bragging”. She has been a member of the Catholic Woman’s League for sixty-two years, member of Legion Auxiliary for forty-five years, PEI Craft Council President for four years, Helped establish Craft guild in Cardigan and president for four years, collected for the Heart Foundation for Twenty years, Alzheimer's for three, Terry Fox for twenty years, helped organize Canada Day and then ran it with the help of friends for eighteen years and helped run card plays for twelve years. She was the President of Victory Chimes for ten years that helps raise money for different causes in the community including sponsoring a child, lion club toy project, and The Mikinduri Children of Hope. She and another helped save and restore the train station in 1975 to where it stands now. She helped organize bingo for the Cardigan Consolidated School that the project raised in total 55,000 dollars. The money went towards the schools playground, ski equipment; first computer room supplied with twenty-five computers and left over money to use as needed for other causes. She won Islander of the year in 1983. She was very proud of being nominated for that. Margaret chuckles after mentioning all the organizations that she is involved in “that is all that I can remember!” On her spare time she even fits in the time to weave at night and sells the weavings for extra money that she has used for travelling to many places such as nine times to England, five to Ireland, Mexico, Japan, Hong Kong, Switzerland and Paris.

Margaret and John have six children, twenty one grandchildren and twenty-four Great-grandchildren. Margaret’s husband (John) passed away many years ago and she continues to live at home with her son John Michael. Margaret is still active in the community and will help people out as much as she can. She continues to dedicate her time to help in our community.

Margaret's story of being a War Bride

Margaret Burton met her future husband at a dance in Eden Bridge, Southern England in January 1943. The man was an islander by the name of John Quinn who was on a two week sick leave from Normandy where he was injured. John was a Corporal with the Military police and was hurt while driving an army truck when a German sniper hit the gas tank causing the truck to explode. John became engulfed in flames so he fell on his side and rolled back and forth in order to put out the fire that had caught his arm. The Red Cross depot put on a dry dressing and sent him forth for more assistance for his injury. They ripped off the dressing causing John to lose his outer epidermis allowing one arm to always be of smaller size than the other. The arm caused John problems for most of his life onwards, especially when he was older up until he passed away.

Margaret can still remember John approaching her at a Saturday night dance in EdenBridge. He asked her if she would like to dance with him and it was kindled from there on. The two married on November 3rd, 1945 at the parochial house with Father MacPoland as the priest of the ceremony. This was the same house that the couple attended for mass as there were very few Catholics and no church at that present time. The couple in later years would return to show David and Bobby their children where they were married and to see father MacPoland.

John returned from his sick leave back to France where his battery was located. He was placed back with a different factory as the people he served with before were all dead. John served from November 1945 till February 1946 when he returned home for good to never return back to war by his own choice. He would rarely talk about his experience in the war often commenting on different things he would have witnessed. Margaret joined John on PEI in July 7th 1946 where they would begin their life together and raise eight children. 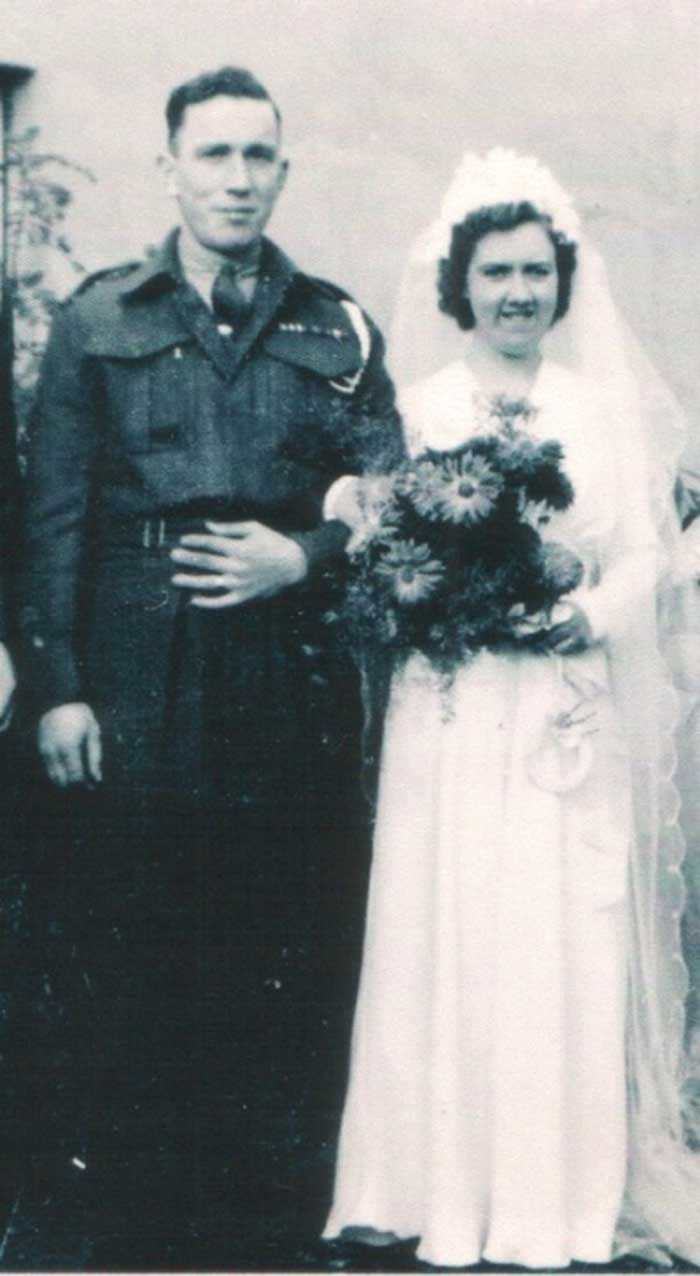 Written by: Crystal Callaghan from the memories of Margaret Ellen Susan (Burton) Quinn