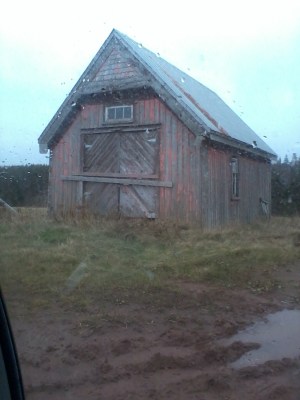 The name may be deceiving, as Eastern Kings was not home to an actual space rocket; however, it was home to a lifesaving marine signal.  The building was constructed by John M. Clark, who was from Summerside, and was built for the Marine and Fisheries Department in 1907.  The idea for the Rocket House was born out of the wreck of the Sovinto[i], and built a year after.  The station was attended by a crew of 12, who typically carried out a practice once a month.  The practice was seen as a great attraction to the students of Priest Pond School, who thought it quite a sight to see the men loading the horse drawn vehicle with all the equipment to take to the shore.  Mr. John Ryan was the first captain of the station, Mr. Charles Campbell was next and the third and last was Mr. A.D. McEachern.  The equipment for the rocket was shipped from England to Souris in the winter of 1907, from there it was hauled to the station in Priest Pond.

The station was never actually put to use; but was called out once for use in Souris; however, by the time it had arrived the crew of the troubled ship were rescued.  The reason it would take so long for transport was because the equipment would need to be pulled by a team of four horses for long treks, such as Souris (unpaved roads).  For local rescues and practices, a team of two horses was used.  The rocket was fired to the ship in distress, it was attached with a light cable.  A set of heavy cables would be hauled from the anchors to the ship.  The apparatus was used for ship-to-shore rescues.

The building still stands today at Priest Pond and is used by the Ryan family to house farm machinery.

[i] The Sovinto was a lumber ship enroute to Australia from New Brunswick; it went down off the North Shore near Fairfield.  To read more, see Shipwrecks