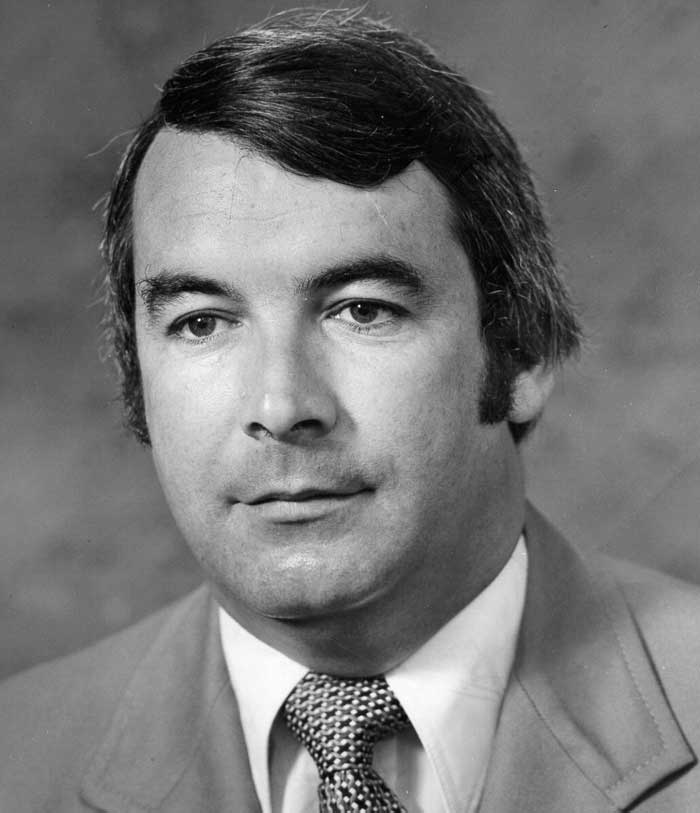 Bennett was born on August 27, 1943 to Wilfred and Edith Campbell (Rice). He grew up in Popular Point with his eleven brothers and sisters. He attended Popular Point School and later went on to attend St. Dunstan’s in Charlottetown to pursue a Teaching profession. In September of 1962 Bennett entered the teaching profession and taught for a total of ten years, eight on Prince Edward Island and two in Montreal.

In 1970 Bennett entered Politics as a Liberal and was elected to the Legislative Assembly of P.E.I.. Then in 1972 Bennett became Minister of Education, and in 1974 became Provincial Secretary. In 1976 he became Minister of Finance. Premier Alexander B. Campbell (no relation of Bennett’s) announced his retirement so Bennett ran and won the Leadership of the Liberal Party. Bennett was sworn in as the 24th Premier of Prince Edward Island on September 18. Bennett held the position until May of 1979 when he was defeated. Bennett then served as Leader of the Opposition and Party Leader from 1979-1981.

Bennett served as leader of the opposition until January 1981 when he resigned to run in a Federal bi-election and was elected to the House of Commons on April 13, 1981. He was appointed Minister of Veterans Affairs in September of 1981 and retained that portfolio until September of 1984.

In 2002 Bennett retired from politics after sixteen years of service and was then elected to the Cardigan Council and served as chair from 2003 to 2007. Bennett was a great supporter of his local community. It was often said of Bennett that when he spoke he had something to say. Bennett was married to Shirley Chaisson and they had eight children together: Kelly, Colin, Grant, Sherri, Grace, Bradshaw, Carmel and John Paul.

Bennett passed away on September 12, 2008 after a lengthy battle with Cancer; he however did leave a legacy here in Cardigan. He was described by Lawrence MacAulay as “Bennett Campbell served as premier of the province, member of the provincial legislature, federal cabinet minister, and after all that a giant of a community man”. During my interviews on this project when seniors were asked what politicians they remembered, Bennett’s name was often brought up and they often menionted how it was a shame the community lost their champion.


While hunting for information on Bennett I came across this letter to the Editor that summed Bennett up fairly well.

Letters to the editor - Editor:

I was saddened to learn of the death of Bennett Campbell. I was Mr. Campbell's communications assistant during his tenure as minister of Veterans Affairs in the early 1980s and I have always had nothing but the greatest admiration for this down-to-earth, caring, witty and forthright man. We travelled the world together on pilgrimages honoring Canadians who paid the supreme sacrifice in such fields of battle as Vimy Ridge, Normandy, Italy and Korea. We were always accompanied by veterans who had fought in whatever campaign we were commemorating at the time and Mr. Campbell invariably went out of his way to make sure that these vets were well taken care of and received the respect they deserved.

While he was not a veteran himself (nor am I although my father went in on D-Day), I saw examples time and again where he was considered one of the boys and was much admired by the men and women who travelled with us.

I could cite many examples of Mr. Campbell's willingness to go that extra mile to look after our veterans, but perhaps one incident best sums up how much he cared for them.

One of the administrative groups that sat in judgment on whether a veteran should get an increase in his or her pension was holding a Christmas party for its members and Mr. Campbell insisted on vetting (no pun intended) the menu for their Christmas dinner. He called in the head of that particular group and asked him what was meant by Postprandial Refreshments at $50 a head. The head of the group replied that this referred to the traditional after-dinner brandy and cigars. Mr. Campbell's angry reply went something like this: Like hell! We have veterans skimping along on meager pensions and you people want to celebrate Christmas with brandy and cigars? Not while I'm minister of Veterans Affairs!

With that, he picked up his pen and ran a line through the offending words, then sent the man packing.

Rest in peace, Bennett. At the going down of the sun and in the morning, we will remember you. 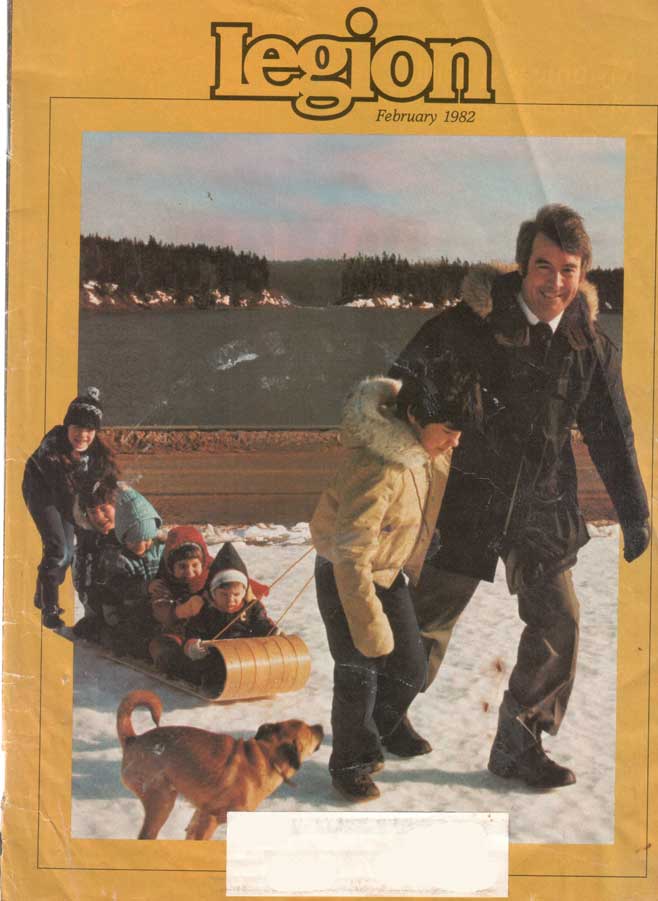 Above Picture: Bennett and 6 of his 8 children on the front page of the Legion Magazine in Februrary of 1982 .
This picture was given to me by Margaret Quinn 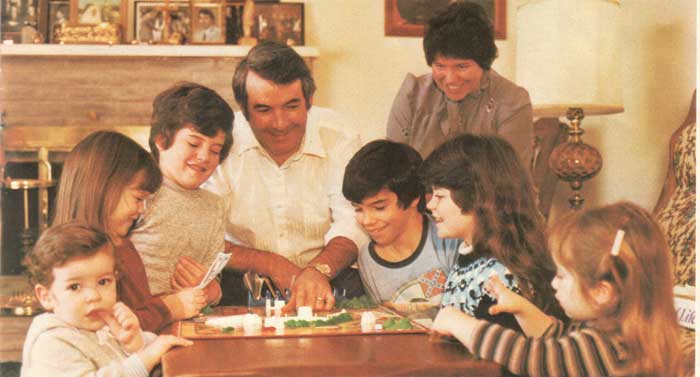 Above: Bennett playing the game "Life" with some of his family
"Life" was an old board game from years ago. 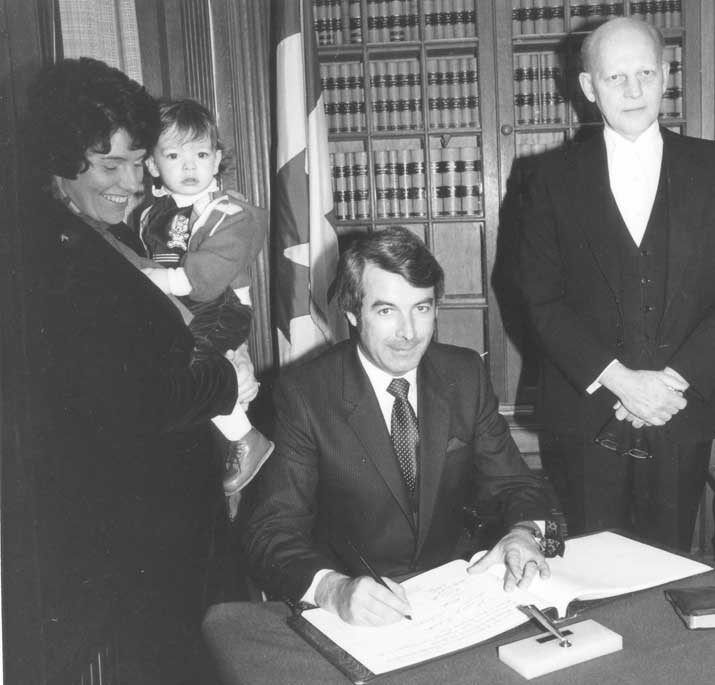 Above: Bennett Campbell getting sworn in to Politics 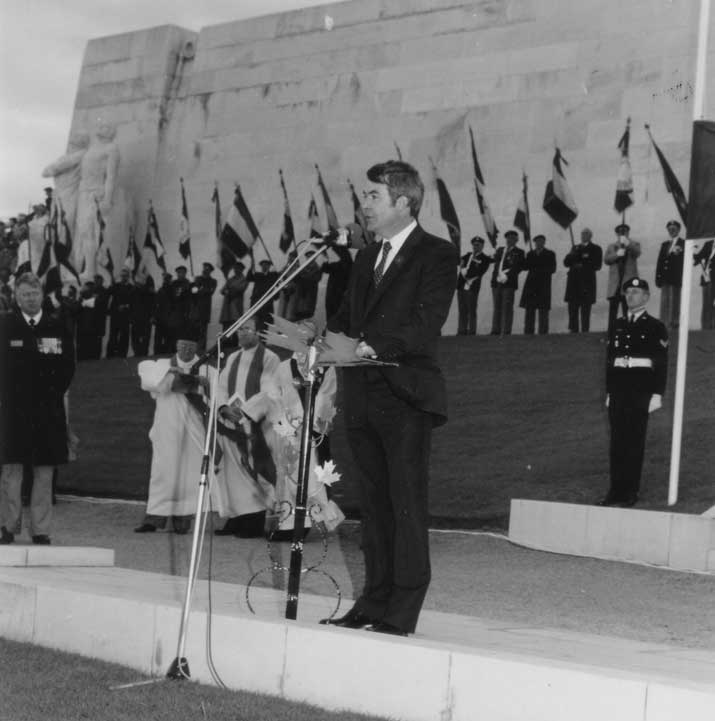 Above: Bennett in Vimy, France 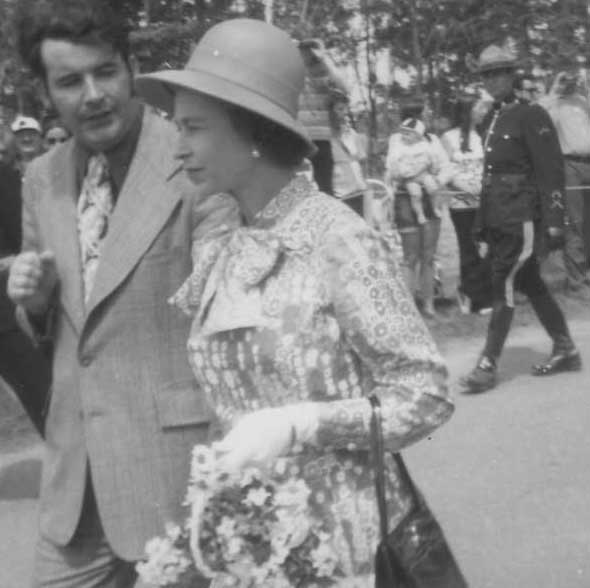 Above: Bennett walking with the Queen