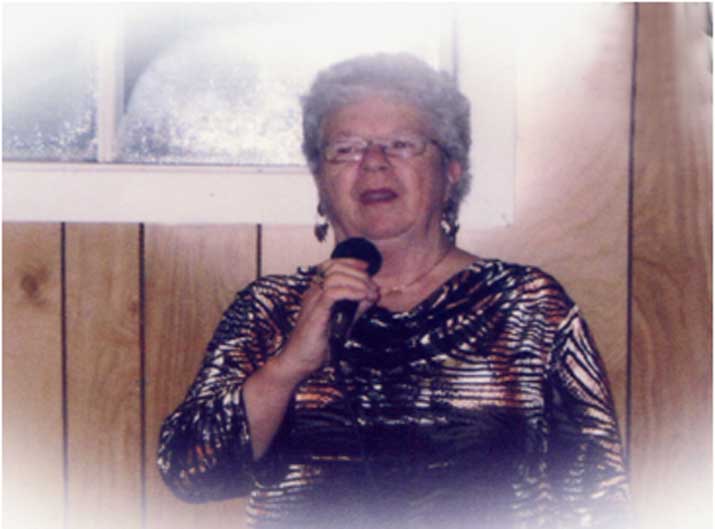 Viola Catherine Shepard was born in Cardigan Head to parents Thaddeus and Mary Shepard. Viola started practicing at the age of nine with a Hawaiian guitar that she picked up on her own. She also took up step dancing at a young age, and although she is uncertain as to how old she was, she jokes that she “learned after she started walking." Viola grew up playing the Hawaiian guitar with which she would travel with her parents to the old Cardigan Head School for dances. Viola sang mostly at home before finally going public in 1971 at the age of thirty-two in the band “The Rovers Four”. The band members included Gordon Gallant, Chester Llewellyn, Art MacSwain and Maxine Gallant. Viola can remember their first performance in that year was at the Kingsway Motel and drew in a huge crowd. She remembers playing at various places that included Kingsway Motel, Georgetown Legion, Morell Legion, Souris Legion, Knights of Columbus and in Fortune to name a few. Viola remained in the band for seven years before discontinuing.

On December 12, 1959, Viola married Melvin Fisher from Peakes Road. They had five children together: Wayne, Kenny, Merlin, Karen and Cathy. Viola has recently made the children a personal recording of her singing as a keepsake. She has not been performing as much these days as before for benefits or various events. However, she continues to sing in the community and can normally be heard at the Lorne Valley dances that are held every Wednesday during the summer at the Lorne Valley Hall.

Click here to listen to an audio clip of Viola's interview

Written by Crystal Callaghan from the memories of Viola Fitzpatrick