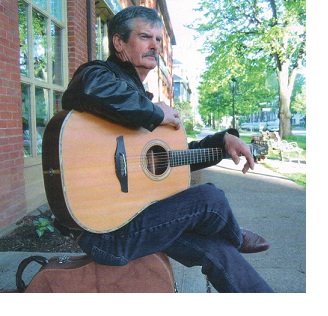 Frank Whitty was born in March of 1958 to Alphonsus (Phonzie) MacGillivary and Laura Veronica Gallant. He grew up in Farmington with his eleven siblings. Frank remembers being interested in music before he was able to walk, and first started playing the guitar at about five or six years of age when Santa brought him one for Christmas.

Growing up, Frank was surrounded by music. His father was a fiddle player, and his mother step danced and sang around the home. Frank remembers his mother’s father singing and playing the accordion and doing Latin Masses. Frank played in a band about fifteen years ago called 'Last Call'; it included his brother-in-law Bobby MacGillivary and others. He played with them for about two or three years; they played at dances and such in Kings County, but never released any albums.

Frank has always loved and played country music, and has played benefit concerts in Kings County for at least 25 years. The first benefit concert he played at was for Alvin Wood. He actually met his wife Cathy through playing these benefits. Frank is no longer in a band, but still plays at benefits and ceilidhs in the Kings County area, and released a solo album in June of 2010 called The Choices I’ve Made. On it, he sings some of his favorite country songs, like “Choices” by George Jones, and some music by Merle Haggard, Conway Twitty and others. You can find his CD at Home Hardware in Montague and other local businesses.
The Graphic wrote an article about Frank last year following his album release. He hopes to release another album sometime this year. Frank also has a Facebook site dedicated to his music that lets people know of upcoming events as well as where his CDs are available. It also has a link to YouTube with a video of him singing “Wild Irish Rose”. He usually plays about three shows a year at the Souris Show Hall in the summer, and plays at the plowing match, benefit concerts and various other events throughout the year. He still lives in Farmington, on the original property of his parents, in a bungalow with his wife Cathy. His mother is 92 and still lives next door.