North Rustico is a quiet fishing village which was founded in 1790, and became an incorporated municipality in 1954. It is located on the North Shore of Prince Edward Island, and because of this, fishing has been the primary industry here for years. May and June find approximately forty boats out on the water fishing for lobsters. Then in July and August, some of these boats change gears and haul tourists for deep sea fishing adventures, catching cod and mackerel. There are also some smaller commercial fisheries such as cod, mackerel, herring, halibut, and blue fin tuna. The first settlers of North Rustico were Acadians who fled British capture during the Seven Years War. Acadian names such as Gallant, Doiron, Peters (Pitre), Blacquiere, and Doucette can still be found filling the pages of the phone book today, even though there are a lot of seasonal residents calling North Rustico home for a few months of the year. Because of this, the population varies, but is approximately six hundred. 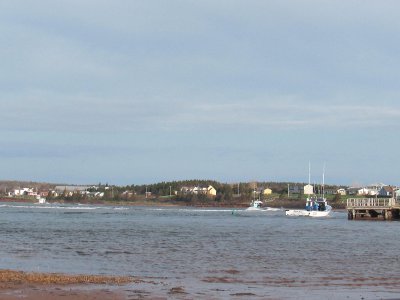