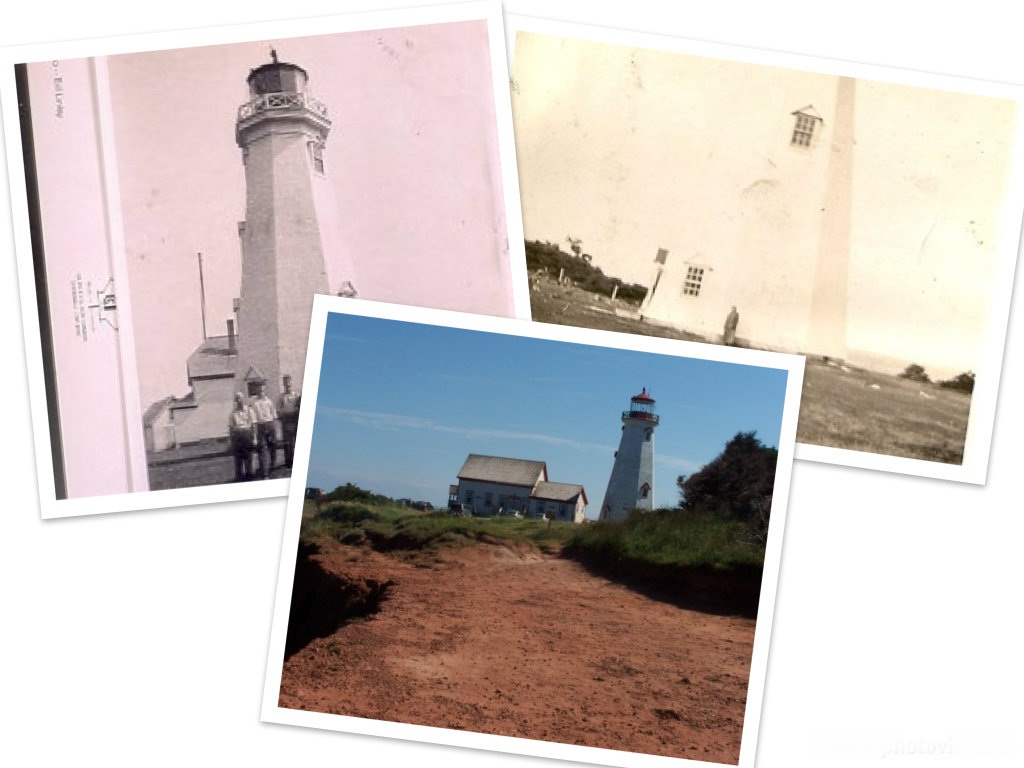 One of the most well-known attractions in Eastern PEI is the East Point Lighthouse.  Best known by the phrase, “Where the sun rises and the tides meet.” The waters of the Gulf of St. Lawrence and the Northumberland Strait converge at this Eastern most tip of the Island.  Construction began on the lighthouse in 1866 by Mr. William MacDonald.  The lighthouse was constructed in an octagonal tower shape and was completed in 1867.  The tower stands 19.5 metres high, with four levels plus the lantern room.  A feature that distinguishes it from the lighthouse at North Cape is its pediment tower windows.    The East Point Lighthouse was the last lighthouse to be constructed prior to PEI joining Confederation in 1873.

In 1877 the Superintendent of Lighthouse for Canada toured the tower in order to decide if it would be able to support a new lantern.  The next year it was decided that work needed to be done on the lighthouse in order for a new light apparatus to be installed.  On June 1, 1878, after renovations were completed a new light was installed; this was a white light that revolved, it achieved its brightest brilliancy every three minutes.

In September 1882, the British warship HMS Phoenix ran aground on the shore below East Point Lighthouse.  Once the crew came ashore, some were cared for at Alexander Beaton’s house.  Mr. Beaton  was the lighthouse keeper at the time; he was also the first lighthouse keeper and the building was erected on his land.  It was later decided the cause of the grounding was “negligent navigation” by crew members.  Many others believed it was due to the location of the lighthouse.  The SS Quebec, three years earlier ran aground in almost the same location.  The investigation into this event concluded the accident was due to a “miscalculation of the distance of the light from the reef.”  In 1885, Mr. Ephraim Muttart, Member of Parliament from Souris, made the call to move the lighthouse 488 metres east, so the lighthouse was 61 metres from the point.  The building was moved by Mr. Bernard Creamer. He used greased timber, pulled by horse and capstan to slide the building into place.

A foghorn building was constructed in 1885, 100 feet east of the lighthouse tower.  This building housed two foghorns, which were powered by compressed air.  When the conditions called for fog warnings, the horns would blast an eight-second alarm every 30 seconds.

A new fog alarm building replaced the old one in 1908. This building rested on a concrete foundation.  At the same time two 25-h.p. boilers were installed and many machinery parts and fittings were updated.  In 1909, the light signature was changed to a white flash that occurred every fifteen seconds instead of the previous flash every three minutes.  At this time, the illumanent for the light was petroleum vapour which was burned under an incandescent mantle.  Not only was a new light put in place at this time, but the building was moved yet again.  The crashing seas had caused some erosion of the cliffs and it was decided to move the lighthouse back another 200 feet. The former site of the lighthouse was where the fag alarm building was built.

A new keeper’s accommodations were built in 1923, this time a two-storey building.  Again in 1965, two new keeper’s accommodations were constructed; these became one-storey, three bedroom buildings. The two-storey building was damaged by fire in 1972, at which time it was declared a surplus structure.  One of the last built, one-storey dwellings was sold in 1980.  The second was sold to the final light keeper Mr. Harry Harris and still stands today. Mr. Harris retired in 1989.

The fog alarm building was relocated a safer distance from the cliff edge in 2007; it is now home to a gift shop and café.  The lighthouse is open for tours in the summer months and is a popular tourist destination as part of the Tip to Tip tour.

The Friends of Elmira were given ownership of the property in 2002. They had previously leased it from the Department of Fisheries and Oceans.

Lighthouse Keepers (and years in the position):