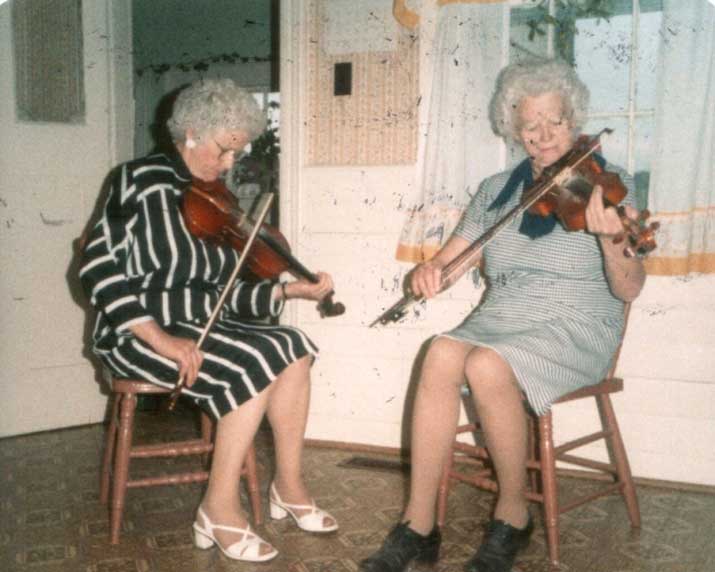 Photo : Left to right – Pat Doucette and Ellen MacDonald
at a house party at Larry Doucette’s

Pat acquired an interest in violin from her father John Campbell as a child growing up. She grew up in a house in which her father and sister Ellen played the violin. Her earliest memory of music is when she was a child waiting for her parents to leave the house so she could take the violin off the wall to practice with. Back then, she explains, the Scottish would hang their violin up on the wall away from the children’s touch and it would only be handled by adults who could play a tune. She can remember her parents leaving one evening and she opened the kitchen oven door and stood on the door in order to reach the violin. She believes at that time she was around ten years old. From then on she waited until she had the chance to take the violin down off the wall. The first tune that she learned to play was jungle bells and from then on she picked up all the tunes without help. She was not allowed until the age of eighteen to play at house parties where she would take her turn and play for a set or two of the fox trot. In the following years Pat accompanied many house parties and other events with other entertainers in the community.

Pat can remember one day in particular being asked by Alvin Burke to play at Ward Crane’s 50th anniversary party. Alvin was filling in for Jack Webster driving the mail route as Jack had to be in Charlottetown to meet his sister that was coming on train from Boston, and would not be home till late that night. So Pat attended the anniversary for the Cranes and provided music with Alvin Burke.

Pat has only stopped playing the violin in the last few years since moving to Perrin’s in Montague. She has three violins at home that have not been touched since then. She shared several photos of her time playing the violin in earlier ages to provide us with the knowledge of the great times she did have in the past. As of now she is quite content not playing and would rather reminisce over photos and memories of times from the past. 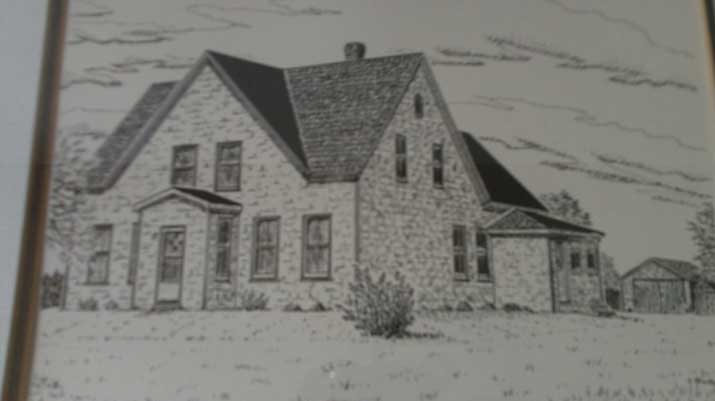 My Island
I’m speeding down the highway
Heading for the Strait.
Because I think the Island
Is still my favorite place.
What Island do I speak of?
Prince Edward Isle be sure.
For when you’re sad and lonely
There is no better cure.
When God picked up his paint brush
He really knew the hues.
The blues, the grays, the reds, the greens
What better could he choose?
He blended them together
And a magic garden made
Like a gem that dropped from Heaven
That never seems to fade.
The country side is rolling
The fields are red and green
With trees and little rivers
That shimmer in between
And all about the beaches
The breakers seem to say
You’re welcome to the Island
Oh please come home to stay.
It’s true that many people
Wandered far in search of gain.
But as the years went rolling by
They came back home again.
And when they sit and ponder
As the evening sun goes down
They bow their heads, and thank the Lord
For the fairest spot they’ve found.
I love you P.E. Island
And no matter where I roam
I’ll always head across the Strait
To the Island I call home
And when my life is over
And forever I must sleep
I hope and pray that bright red soil
Will be my pillow deep.

There used to be 2 schools in the community - Big Run (also known as the Riverview) and Cumberland Hill. In 1947 these two districts were amalgamated. In later years, a poem was written to commemorate the Cumberland Hill School.

Lest we forget the one room school
Wherein was taught the Golden Rule,
In the following lines I'll attempt the truth
Hail Cumberland Hill! the school of my youth.
The school no longer stands upon the hilltop
Surrounded by forest, what a scene!
Where the children came to learn the fundamentals
And romp and play each day upon the green.
Though it's walls and floors were not fancy tiling
Where single desks were classed a luxury
And in place of modern steam or hot air heating
The wood fire blazed and crackled merrily.
Within its rugged walls were taught real lessons
Society bears the proof of this today.
On a stage with modest curtains made of bedsheets
Was enacted many a colorful Christmas play.
We did not know such things as strikes and boycotts
Walk outs, sit ins and all this modern slang
But we clearly understood respect and honour
The moment that old rustic school bell rang.
The water pail sat in a special corner
Where all could reach and dip that favorite cup.
Though dust and germs were likely never lacking
One loved to run and have another cup.
The outhouse offered very little comfort
With frosty snowflakes drifting through the cracks.
There was no such thing as "Saniflush" or "Delsey"
A place where sanitation was quite lax.
Just to hear those children's voices on the playground
Where gaping pole barns is the scene today
And those stately trees where once we hid our faces
Will never more be there to swing and sway
They say those days are past and gone forever
And larger schools and buses there must be,
But that little country schoolhouse by the roadside
will always bring fond memories to me.


©- Patricia (Campbell) Doucette
was born in Poplar Point
She was a teacher.