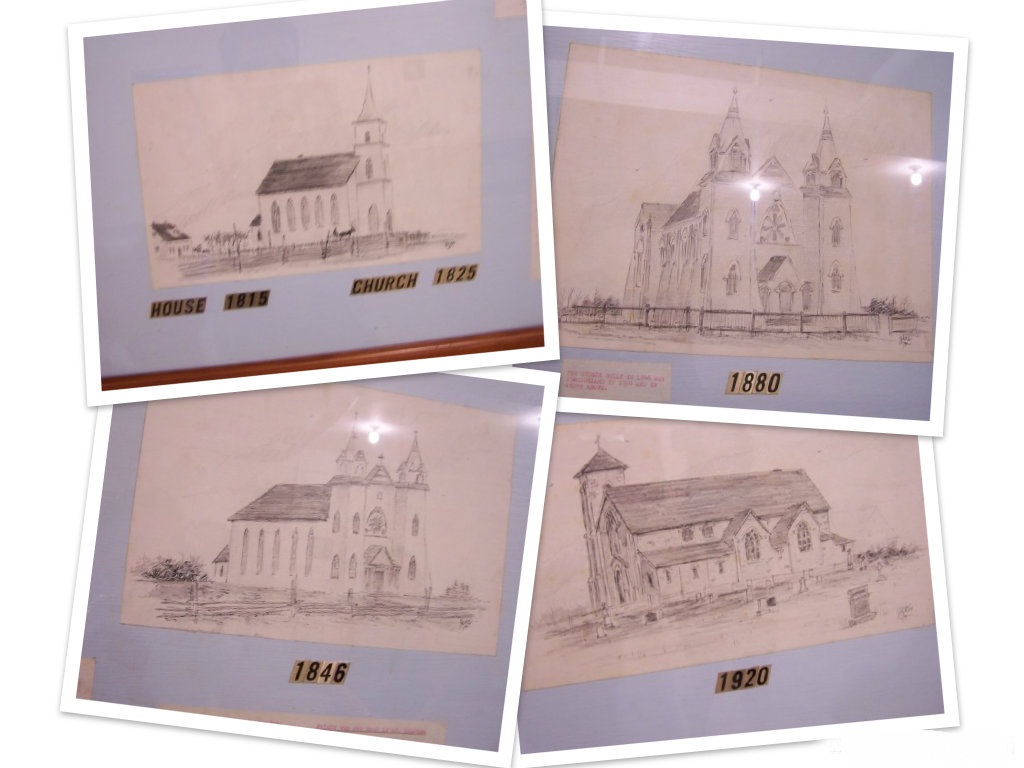 Early settlers to East Point built their first Roman Catholic Church in 1806, a simple log cabin design.  The second church was erected and completed nineteen years later  in 1825, a wood frame building that was finished inside with a ceiling, fresh paint and gallery.  The congregation of St. Columba grew over the next few years, so much so, that in 1846 a larger building was required.  This included an attached vestry that proved to be too small for its needs; a larger one replaced it in 1885.  At the same time as these renovations occurred, twenty two new pews were added for the still growing church community.

In the church in 1846, a beautiful piece of needle work hung above the altar; embroidered by French ladies of previous centuries.  The Stations of the Cross that adorned the walls of the church were also an intricate and distinctive piece of artwork.  As well, the bell that chimed at St. Columba could be heard for seven miles, a distinct and beautiful sound.

In the years 1791 to 1835 the settlers in the St. Columba parish were dependent on Bishop McEachern’s visits to their area, sometimes no more than twice a year; and also dependent on the mission of St. Margaret’s in Bear River. Then, in 1835 Rev. John MacDonald of Glenaladale was appointed to St. Columba.  Rev. MacDonald stayed until his replacement Rev. Pius MacPhee arrived in 1884.

Early in the year of 1917 the newly renovated and remodelled church of 1846, was completely destroyed by fire.  All of the beautiful pieces of art, vestments and statues were lost.  However, soon after this fire a new parochial building was erected to house services until a new church could be built.  The building of a new brick church began in 1918 and was dedicated in 1920.  When talk began of a new church being built, the questions arose of where to rebuild and how many churches should be built.  The decision was being split between people who wanted the church built on the old site and those who wanted one built in Elmira and East Baltic- two churches.  In order to make this decision, financial pledges were made by community members, and the Bishop dispatched the Vicar General to resolve the situation among the residents. Father McLean (Vicar General), then asked those who financially contributed to vote by ballot; he then announced the decision when the votes were tallied: one church on the old site.  Work on the new brick church began immediately as a way to avoid more discussions and disagreements.  It was an unfortunate decision that the church was built from brick, because five years after its completion it was in need of repairs.  These repairs continued from 1925 until its abandonment in 1963; it was finally demolished in 1964.  It was estimated that costs over this period of time exceeded $90 000. Construction of a new church was completed in 1965, until this time celebrations took place in the Parish Hall. The basement was finished with classrooms and a kitchen in 1973; as well the front entrance to the church has been modified many times since 1973.  The installation of many stain glass windows has contributed largely to the beauty of the church.