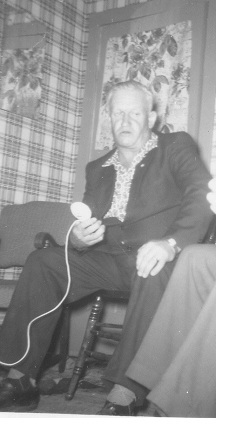 Cosmas Sigsworth was born on September 16, 1917 to parents John Thomas Sigsworth and Mary Ann (Decourcey). He was a well known local entertainer in his time playing at showers, kitchen parties, benefit concerts and square dances. He was always good to help out and has been regarded as one of the most important people in the community because of his volunteer work. There was always music in the Sigsworth household and a lot of love. Cosmas' mother was quite musical, starting on the organ around eight or nine, she played the organ, mandolin and passed on her knowledge of music to Cosmas. However he also learned a great deal on his own and had a good ear for music. He would regularly travel by horse and sleigh to house parties in the area. Cosmas loved his horses, often taking in ones after their racing days were done and giving them a good home as pets.

Cosmas had a ritual every night before he would go out to play. He would always kiss his wife goodbye and she would tell him to say his Act of Contrition before he would go out on the road. He was able to play the organ, fiddle, and steel guitar but the fiddle was his main instrument. His wife played the guitar and always claimed she could "play the radio real well."  Cosmos and his wife renewed their wedding vows on their 50th wedding anniversary. They bought new rings for the occasion as Cosmos had lost his in a furnace grate years before. Cosmos always did one song in particuler for his wife, "When I want to Love a Lady I go Home," also known as "Some Kind of Woman" by Conway Twitty.

Cosmos' daughter Judy remembers her parents as having a great love and being surrounded by it as a child. She notes her father was very outgoing and could get along well with young people just as he did with his own generation. She told us a story of when one of her children was born and they were in the process of building their house and were staying with her parents untill it was built. She hadn't even heared the baby waking but her father had and was making the baby a bottle. This was in the early days of microwaves and he came and woke her up to tell her he thought the bottle had blown up. It turns out he had mistakenly put the bottle in for eleven minutes instead of for one so it had blown up. Another time when he wasn’t feeling very good he decided to make himself "a hot toddy with shine" so he boiled the kettle and got down a jar from the top of the cupboard. He mixed it up and took a drink but it tasted funny and had no kick from the shine. He wondered what was wrong. It turned out that he had taken down the wrong jar, mistaking the  Holy Water for the shine.

Cosmos never released any tapes or CDs in his time though his music will be remembered in Kings County for years to come. He traveled all over Kings County to play, going as far as Wood Islands, Murray River, Souris and everywhere in between, often opening his shows with a joke or two. He played well into his eighties, stopping just a few years before he died. He and his wife both died at age 84, two years apart. They were together for 55 years. In his final days, Judy remembers going to see him while he was in the hospital. He was bed ridden because he had his hip replaced and his kidneys were acting up. She told him she wouldn’t be able to see him this weekend and he was cranky because he was bed ridden and was used to being up and mobile. She told him not to be cranky with her; he told her he could never be cranky with her that she was “pretty as a picture”.

Cosmos passed away that weekend on February 11. Three days later on Valentine’s day Judy was waiting in a checkout line and saw a picture frame that said “pretty as a picture” and figured it was a sign and bought the frame. Her mother passed two years later, on April 7th; she was at the nursing home visiting her mother who had Alzheimer’s bad and her brother Barry told her to go home and take a break and get something to eat. When she got home the phone was ringing for her to get back to the hospital, that her mother was dying. She got back there and dropped her boots at the door and her mother died shortly after. Her mother always believed throughout her life that pennies when picked up brought a person luck. When Judy went back out to get her boots there was a penny sitting next to her shoe. Judy keeps the penny in the picture frame she bought and her parent’s memories in her heart.