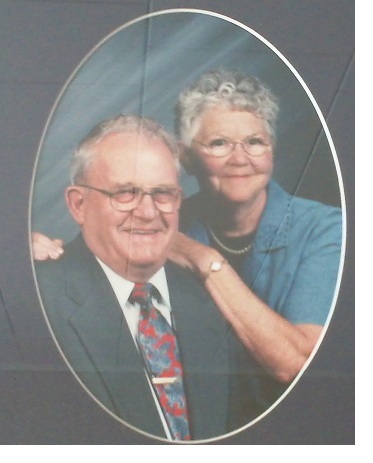 Raymond Shaw was born in Lorne Valley in May of 1929 to Daniel Shaw and Annie Maie Mary MacLaren. He was the second of eight children born to Daniel and Annie, and was raised on the family homestead, where he still lives to this day. His father was a farmer, and his mother worked at John A’s store in Cardigan. His son Shane lives in the original home that he was born in.

He went away to work in the woods of Nova Scotia in his younger years, but came home and married Muriel MacDonald. They had 11 children together, raising eight of those on the farm, and losing three in childbirth. They later lost their daughter Heather Muriel in a car accident at the age of 21, and took on raising her daughter Stacy.

He worked all of his life on the farm, and also worked as a school bus driver for 28 years, and a mailman for 29. Both his families’ ancestors immigrated to PEI in 1803. The Shaw ancestors originally landed in Selkirk; the Shaw brothers Neil and John married two sisters from Lorne Valley in a double wedding, and then moved to Lorne Valley. His MacLaren ancestors originally landed in Brudenell in 1803, though he is unsure when they came to the Cardigan area. Those MacLarens are members of a group known as the Brudenell Pioneers. Raymond’s great grandfather Duncan MacLaren was a well known master shipbuilder in the area, and was well known in the shipping community. What is lesser known, however, is that he had a hand in building the Cardigan Presbyterian Church.

The local church in Lorne Valley that Raymond attended has had six generations of his family attend over the years. He remembers the local school house he went to, that had 40 children in 10 different grades. He didn’t like school much, and the teachers had too many students to be able to help him individually. He remembers the premier and local politicians coming to the new school to give them an award for being the most improved school. He recalls Peter Macleod’s mother, Nancy Macleod, a member of the local Women’s Institute, as being well educated and a good speaker. She spoke the day the school recieved the award, and he recalls that “she didn’t take a back seat to the politicians,” and that “she was a good public speaker”. He recalls Nancy as being well involved in the community, organizing many events.

Raymond still lives in his home on County Lane with his wife Muriel; his son Shane lives in the original homestead, and his son Walter lives in another house on the property. His sons opened a business on the property called Shaw’s Meats. Raymond has 19 grandchildren and four great grandchildren.


Written by Betty-Anne Acorn from the memories of Raymond Shaw