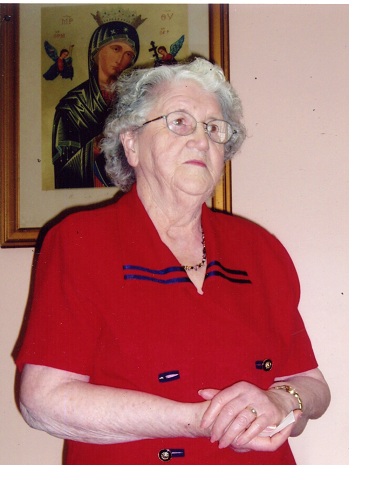 Mary was born an only child to Neil Alexander Gallant and Ellen Monica McLaughlin. She was born in Alberry Plains, PEI, in 1928. She remembers that during World War II, Ed Collins was hired to transport Catholics to Veron River Church in his old ton truck, and Jack Doyle would collect money every Sunday for the fare. At the beginning of the war, British pilots trained on PEI, and the local children would go outside to watch them learn how to fly evasive maneuvers.

Mary loved Veron River, and when her father spent two summers as a caretaker of an inn in Stanhope, Mary would have to go along. Stanhope was a beautiful place, but she couldn’t wait to get back home after the summer was over. She attended a one room schoolhouse in Alberry Plains. She remembers that if you were first to complete your math problems, you and another girl or boy would be sent to get a bucket of water. If the boys went, they usually went to the nearby creek, as it was farther away from the school and took longer to return from. The Girls would try instead to go to a nearby house and get the water. Mary made it to grade 10, and went to UPEI to take teacher training. She taught school before she was married for about five and a half years.

She married Glenwood Joseph Redmond in 1951 and moved to Corraville. She was married just 5 years when her husband was killed in an accident, leaving her to rear three children on her own. Her father-in-law moved in with her after to help out, and she had her third child around four months after her husband had passed away.

In 1975, Mary took on a new task - she wrote a note to a woman who worked with foster parents, telling her that she would like to help out, like the Respite Care of today. The woman later called and asked her for details, such as what ages she would like to care for; she told them it had been a while since she had taken care of babies, so she would prefer older children. She received a call a little while later from the woman telling her she had two boys - one who was two years old and the other who was eight years old. She asked them how long it would be till they arived, and to her surprise, the woman told her she would be there in twenty minutes. So, Mary went out and fed her cows in the barn and tidied upin anticipation of their arrival. She remembers the little one’s coat being quite dirty when he got there; she took them in and cared for them for six months.

She remembers one little boy she took in as being a bit of a handful during the day, but when she put him to bed, he would be sweet, and always asked her a lot of questions like “when did we get power?’ and such. He then asked, “When did they start giving kids away?” She remembers it being very sad. She had one little girl with her eight different times, and the little girl used to come and visit her afterwards. She remembers one that she was told was an 'emergency case'; she was called because the boy was only six years old, and yet was found intoxicated in the street, as he had gotten into his grandfather's alcohol. She took care of him for six months or a year, the first time. Then, she was called again when he was nine, and had him for another year. She says she didn’t have any problems with him, though.

She took in foster children for twenty two years, taking in seventy six children in total, and over half of the foster children she has taken in are still in contact with her. Mary’s son Brendon Glenwood Redmond died in 1978, but her two daughters are still living. Her daughter Dr. Mary Linda Redmond is a brilliant woman, who became a surgeon specializing in heart and lung surgery, and then in pediatric cardiac surgery; she now helps chronic pain sufferers in Ottawa. Mary’s youngest daughter, Monica Theresa, was born around 4 months after her father died; she works with Indian Affairs and has a son, Thomas Brendon, who is now 27.

Mary is now in her eighty fourth year, and still lives in Corraville, Prince Edward Island, with her dog Minnie and 3 cats for company. She still drives her own vehicle, a 1997 Honda Civic, and jokingly remarked to us that she often wonders if it will be her or the car that will quit first.