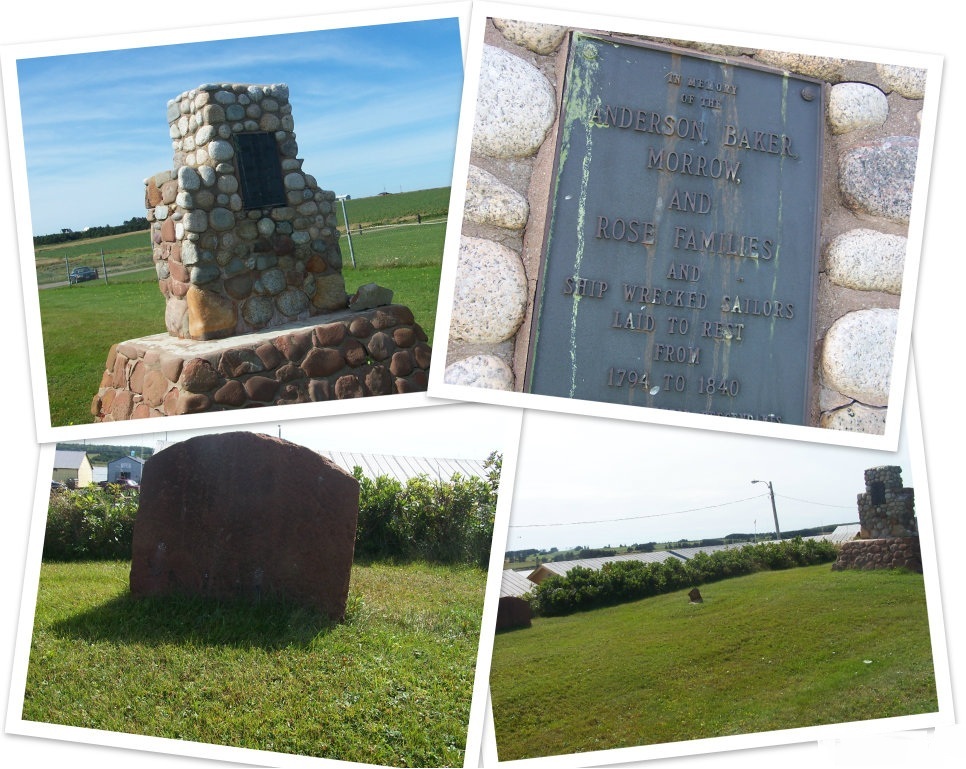 This picturesque cemetery located on the west side of the highway after crossing the North Lake Bridge and sits on the hill overlooking North Lake Harbour.

It is most well-known because of its importance to the memory of early settler s of North Lake.  It is also a tribute to the many seafaring members of the early settlers.  The location of the cemetery is significant because it is on land once owned by Mr. Peter Rose, one of the first settlers to North Lake.  Mr. Rose was born in Dorsetshire, England in 1763.  He was a private in the First Battalion of the King`s Rangers, during the time of the American Revolutionary War.

Mr. Rose came to Prince Edward Island (then St. John’s Island) with the First Battalion in the spring of 1782.  He was living in Boston, Mass. when he joined the Rangers and became servant to Captain Edward Mainwaring. Members of the Battalion were being encouraged to stay on St. John’s Island in November 1782.  Mr. Rose is recorded as having received one hundred acres in Lot 47, according to the Muster Roll of June 12, 1784. Ms. Martha Potts accompanied Mr. Rose and Captain Mainwaring to Surveyor’s Inlet to claim their land.  After staying for some time the Captain decided to return to England.  He agreed to Mr. Rose taking ownership of his land, on one condition: he marry Ms. Potts.  Mr. Rose did so and received the land in 1796.  Mr. Rose’s brother Sampson arrived with his wife in 1804.  The Rose families that live in North Lake are descendants of Sampson; Peter and Martha had no children.

In 1794, the first internment was made to the cemetery; the last was 1840. Although there are no records of the residents of the cemetery; newspaper clippings site the following as buried there:  Peter Rose, Martha (Potts) Rose Anderson, William Anderson, Uriah Coffin, John Morrow, Hepsabeth Coffin, Abigail Morrow, John Morrow’s mother (name unknown), and John and Eunice’s infant child.  Several bodies from shipwrecks were also placed in this cemetery.  It is also possible that other disbanded soldiers from the Loyalist forces, who settled and received land in Lot 47, were also buried here.

The grave markers that remain in the cemetery are made of red sandstone.  In 1973, which was the centennial year of PEI as a province; a memorial plaque was erected in the cemetery.  The Anderson, Baker, Morrow and Rose families contributed to this memorial cairn.  A poem by Franklin Baker, “The Graves Upon the Hill,” commemorates the site.