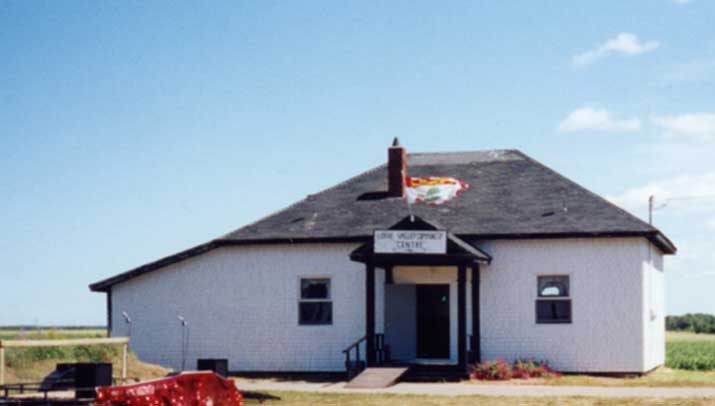 The first school in Lorne Valley was built in July 1878. Before the Lorne Valley School opened, children form Lorne Valley attended Cardigan Head School. At first there were twenty to thirty students that attended the school and the number slowly started to decline. In 1919, the school went through a period where there was a threat of closure. However, there was a large family of seven MacAulays that moved into the area that kept the school from closing its doors.

The school held activities for the community such as dances, debates and music lessons. One very big community event was the annual Christmas dance. The students would practice their plays,recitals, songs, and choruses for the majority of the month of December. The night of the concert would bring Santa, making it a pleasurable evening for all.

In the 1930's, the school’s enrollment was at a high of forty-eight students. The district was aware that it was time for a new building. The Woman’s Institute started fundraising money to be put towards the new project. The construction began with the help of people in the community including supervisors George MacInnis and Walter MacLeod. The second school was completed in 1938. The new building provided the students with more space including a coal stove in the middle of the room, a library area and a cloak room.

In 1939 the school was awarded a sliver cup by the Governor to the school showing the greatest improvement in beautification of property. This award was shared with the Savage Harbor school house. In 1941 and 1942, Lorne Valley became the sole winner of the cup permanently. The cup was placed in a cabinet made by Neil MacCannell for display. It was known to be one of the finest schools in the province in its day. The cup is still on display this present day in a showcase at the school for public viewing.

Children from the school can remember playing different games including softball, stealing sticks, kick the can and hide and seek. The winter provided many activities such as building snowmen, forts, snowball fights and Christmas concerts. Then there were also visits from the Red Cross, Public Heath and Woman’s Institute that provided cod liver oil capsules, spelling bees and debates.

In 1966 the Lorne Valley School was closed as Cardigan Consolidated School was opened. This affected schools in the area of Cardigan, Corravile, Martinvale, Glenfanning, Cardigan North, De Gros Marsh, Cardross, Roseneath and St. Georges.
In order to preserve the school, the community took it over as a community center for local activities. There is a dance held every Wednesday featuring old-time sets. People in the community still hold functions and make use of the building. Memories of the old are shared amongst the people as new memories are created.

Written by Crystal Callaghan from the memories of the Lorne Valley reunion of 2001.