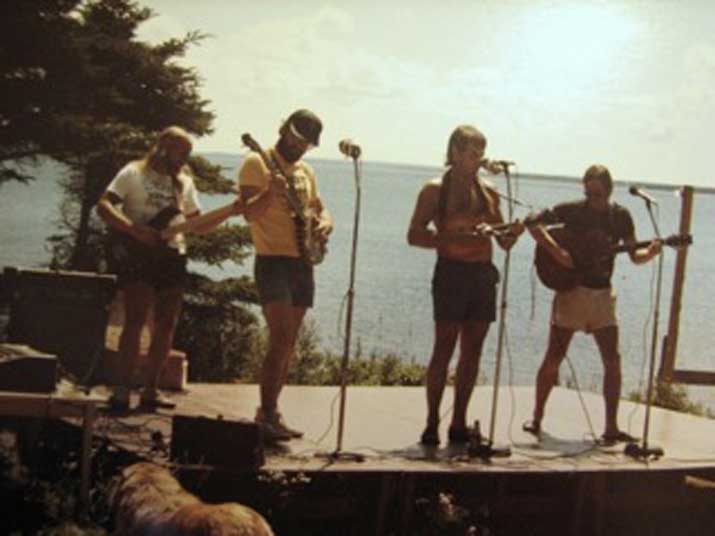 The Rubber Boot Band in their younger years

The Rubber Boot Band began in 1979 with original members Ed Rebane, Brad Oilver, Scott Taylor and Rheo Rochon. The band started out on St. George’s Road where most of the band lived and in the mud season they would show up to play in rubber boots, hence given name “The Rubber Boot Band”.

The band played in many community legions, community halls and different bars throughout the Kings District. They were even noted for playing in a cow stall, a dory and of course on the beach! The band was also known for their famous Rubber Boot Band picnic on the shores of De Gros Marsh from 1985 till 1990. Coming on the last of the picnics it was attracting over seven hundred people. The Rubber Boot Band was also featured on television programs such as “Sounds of the Island” and “Ryan’s Fancy”.

The band now is comprised of members Brad Oliver on guitar and mandolin, Scott Taylor on Guitar, mandolin and fiddle, Rheo Rochon on banjo and Real Longuepee on Bass.

Down in King’s County, there’s hard working folks
Some work in the fields, some work on the boats
A the end of the week when we all draw our pay,
You’d think the Indy 500 was heading this way!

(Chorus) And the traffic’s runnin’ hard again
All the way to Cardigan,
People runnin’ up the hill
To get a case of beer

Gonna buy a quart of rum,
Gonna have a little fun
Friday night in Cardigan
And everybody’s here.

Come Saturday morning me throat she is dry,
My wife says to me: “let’s go shoppin’ b’y”
We went to JD’S and I said to her” Dear,
You go get the groceries and I’ll go get the beer”

Come late Sunday night not a cent to my name
Tomorrow at eight it’s that old working game
Me work’s piling up I’ll be put through my paces
But Friday at four boys it’s back to the races!

Brad Oliver released a CD with the original song in 2009. The late owner of the Eastern Graphic Jim MacNeil declared “The Cardigan Song” to be the official anthem of Kings Country.

The band has been making their way back into the public ear and entertains at many places in the area. As for the future of The Rubber Boot Band, they hope to be playing for many years to come. 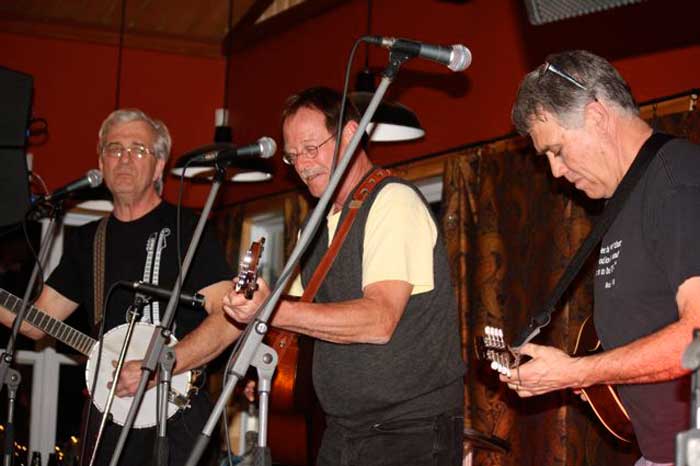 Written by Crystal Callaghan from memories of Rheo Rochon